So continues the countdown of my personal favourite twenty games of 2011. This is the third post in the series, leading on from parts One and Two. 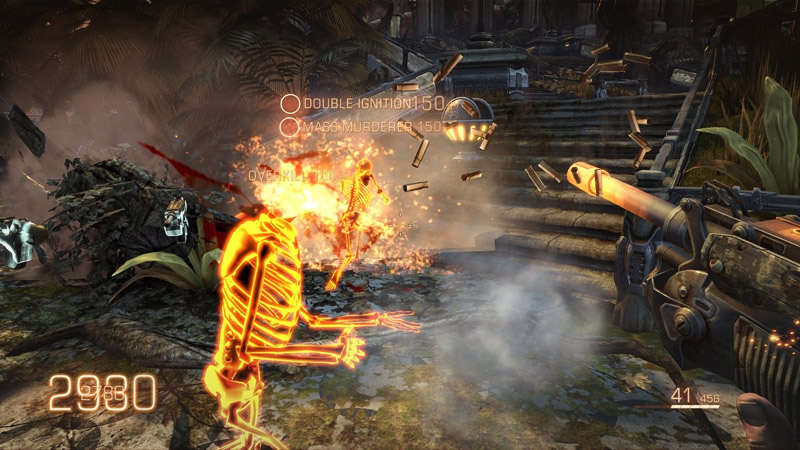 I never intended to give Bulletstorm a chance. Just another manshooter among many other manshooters in an industry that really doesn’t need any more manshooters. But then I somehow stumpled into a Twitter conversation with many people insisting I should try it, and then Epic sent me a copy, and now I regret ever dismissing it.

Bulletstorm is, indeed, a ridiculous and utterly absurd manshooter, but it knows that is is ridiculous and utterly absurd manshooter. I think Adrian Forest has perhaps said it best to me: “It is what Duke Nukem Forever should have been.” It consciously plays with and exaggerates conventions to create truly laugh-out-loud moments. Not just the emergent ‘lol’ of managing to do something unintended, but the fully scripted, directed laugh. I know of few games that can pull this off. The best is a pseudo-boss battle about halfway through the game. There is this pipe and, well, perhaps you have to play it for yourself.

The game looks, feels, and flows amazingly with interesting weapons, breathtaking scenery, clever design, and countless interesting ways to kill things. The ‘skill shots’ that reward you with points for killing enemies in unique ways have essentially gameificated the first-person shooter, but it works. Best is when you are experimenting with weapons and the environment and the game rewards you for it.

I do have an issue, though, with “intentionally dumb” games like Bulletstorm or Just Cause 2 or (I assume) Saints Row 3. As rollocking as they tend to be, are they just the easy way out? They’re dumb, but “we meant to do that” so that makes it okay? Wouldn’t the real challenge be to make a game that isn’t dumb in the first place? But maybe ‘dumb’ is the wrong word. Just because something is comedic does not mean it is dumb. It is something I constantly struggle with. I know I love these games, but I feel slightly bad for it. 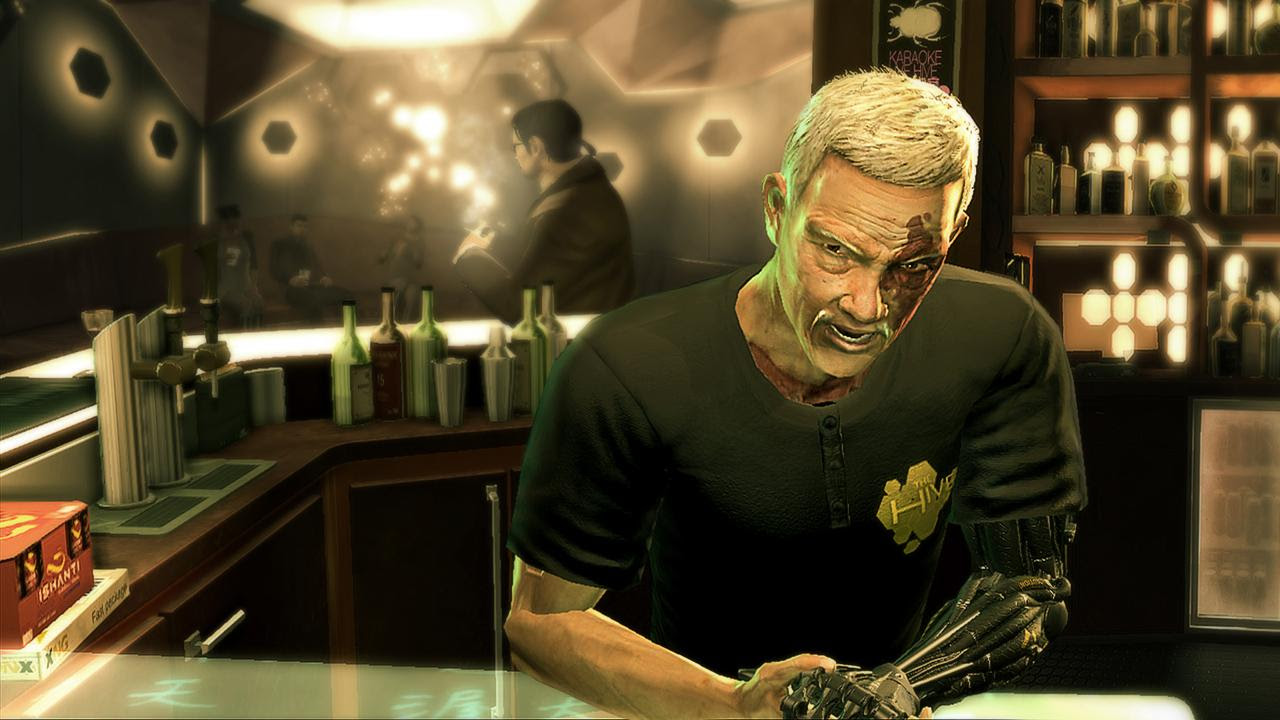 Deus Ex: Human Revolution isn’t so much a love or hate game as it is a love and hate game. The highs are so superbly high, and the lows are down in the gutter. The story and writing are top notch; the cyberpunk world is beautifully realised and thoughtfully implemented in both narrative and gameplay alike. The multiple ways each challenge can be approached from is incredibly impressive, and there is plenty of breathing room for improvisation without having to reload the moment something doesn’t go according to plan. Everyone can make their own version of Adam Jensen no less or more viable than anyone else’s.

But then their are the lows. The mindbogglingly bad boss battles would have been an irritation in any other game, but in Human Revolution they are outright offensive. It’s truly hard to believe that through the entire development process of the game not a single person noticed how terrible, unintuitive, and jarring they are. Being forced to fill a meat-sponge with bullets after being able to sneak through the past few hours without a gun drawn is just dumb. You would have thought the designers noticed this when they were forced to fill each boss arena with randomly scattered machine pistols.

Each boss is worse than the last and the story itself goes haywire to a Metal Gear Solid 4 degree in the final act, spiralling into incoherency before a disappointing “press a button to watch a contradicting and absolutist cut-scene” ending. For a game all about exploring the grey areas between the binaries—good and evil, human and machine, flesh and computer—the black and white endings are doubly pathetic.

I loved Human Revolution while I was playing it and not fighting a boss, but I felt nothing but cheated and angry by the time I finished it. ‘Angry’ because the parts that are good are so, so, so incredibly good.

Some of the GOTY lists I participated in this year strictly said “No HD remakes!” which I think is sad as the Ico & Shadow of the Colossus HD remaster for PS3 is nothing short of remarkable. These games strained the ageing PS2 to the limit and ran with faulty framerates and less-than-perfect resolutions. Now, in HD, both games feel like they were always meant to be played like this: breathtaking, smooth, and remarkable.

I played Shadow of the Colossus first as I never actually completed the original (I got annoyed at the final colossi and never went back). The newly visible detail in the giant world and its citizens is remarkably clear, and each colossi moves with a fluidity of purpose.

Ico, too, has not only survived the test of time but come out better on the other side. Just watching Yorda walk around and interact with her surroundings is pleasing. Certainly, it is let down ever-so-slightly with some clumsy platforming and last-gen checkpointing, but nothing that can’t be overlooked.

Most interesting to me was playing theseg ames for the first time through a critical lens. I was a teenager the last time I played Ico, and not much older when I played Shadow of the Colossus. Much of the nuance of the stories and the environments and the mechanics went over my head then but this time I was finely aware of every element of each game working in unison to affect me in a certain way.

One scene of Ico in particular is crafted so masterfully as to be hardly noticeable, and I wrote about it for Paste magazine. Further, Jorge Albor and Scott Juster over at Experience Points talk about the HD games in an insightful two-part podcast series that is well worth a listen to.

Portal 2 is Valve at their storytelling and worldbuilding finest. Not because they top Portal, but because they, somehow, manage to follow up Portal in an appropriate fashion. Whereas Portal’s surprise was that it was actually telling a story in the first place, Portal 2’s story is there from the beginning. It has to be. Its players already know the twist from the first game, and they are looking out to be fooled again. So Portal 2’s main achievement, then, is to successfully weave a story throughout the entire game that can justify a long sequence of disconnected puzzles to solve. It pulls it off flawlessly as the player works their way through Aperture Science’s long history of testing.

The writing is excellent, as is the pacing with only a few puzzles verging on the tedious. The fleshing out of Aperture Science “behind the scenes” of the test chambers as both part of the world and the story is remarkably well done without ever detracting from the puzzle solving for too long. Meanwhile, the new additions to the puzzles, such as the paints, only add to the portal gun’s centrality, rather from detracting from it. Everything still comes down to that simple pleasure of twisting space with portals.

Still, despite its masterfully told story and realised world, Portal 2 does lack a certain free-form playfulness that the first one had. There are few surfaces now that a portal can be placed on, making it much harder to perform crazy acrobatic tricks except explicitly where the game wants you to. It is sometimes less about thinking with portals and more about trying to find the one place a portal will go. This is not necessarily a criticism, but it highlights a different, more narrative-centric goal of the sequel.

A lot of people wrote a lot of things about Portal 2, but being in the middle of a thesis when it came out I read very little of it. Still, Kirk Hamilton’s review at Paste is a certain standout, as is G. Christopher William’s article at Popmatters reading Portal 2 through the lens of gender and power relations.


And so ends Part Three.
Posted by Brendan Keogh at 5:40 PM

online offers and best working paypal generating offers such as , free paypal cash which can make you happy.