So continues the countdown of my personal favourite twenty games of 2011. This is the fourth post in the series, leading on from parts One, Two, and Three. I first played Where Is My Heart? at the Kill Screen warehouse party during GDC. I was slightly intoxicated and incredibly tired and was not entirely sure what was happening, but it had a distinctive charm that hooked me instantly. But it wasn’t until its eventual release on PSN in November that I could finally sit down and give it the time and appreciation it not only deserves but demands.

A seemingly simple little platformer, Where Is My Heart? is most unique in how it leaves you feeling utterly mentally and physically exhausted when you play it. It hurts your head. The sliced up and scrambled tiles that you are required to view the world through require you to rearrange and make sense of the world in your head, and then hold onto that as you solve the otherwise-simple puzzle of each stage. Some levels are night impossible to conceptualise and to actually imagine how they ‘really’ look and this is all part of the theme: a blurred perception can make the most straightforward challenges seem nearly impossible.

It is a beautiful and disarming game well worth the low price asked for it on PSN, and I can’t recommend it highly enough.

I wrote a review of Where Is My Heart? for Edge that I was really happy with. Also, if you happen to have an old copy of Kill Screen Issue Zero around somewhere, I highly recommend reading Ryan Kuo’s interview with developer Bernie Schulenburg.

Most iPhone games are a blast to play for a few days or weeks and then never played again. Nintendo might (and often do) complain that this means they are “disposable” or unworthy games, but I see no issue with a game that gives me a quality experience for only an hour for 0.99c. It’s not disposable, it’s short. But I digress. The point of that was meant to be that Forget Me Not has withstood the test of time on my iPhone, being played consistently for the many months since I first stumbled across it.

Forget Me Not is best described as a roguelike pacman shooter, which only sounds odd until you play it. You control this little square creature through what I think are procedurally generated mazes (at the least, there is a lot of them) collecting flowers and shooting enemies. Movement and shooting are both automatic, leaving the player to only have to worry about steering. Enemies are greatly varied and often end up fighting each other, too, while explosions can destry who segments of the world itself.
It is a deceptively deep and intrinsic game with systems, abilities, and scoring perhaps best discovered than described. In your first few games you will probably end up shooting yourself in the back or being telefragged by appearing enemies until you finally begin to understand how it all fits together. It’s a game easily learned but rarely mastered. I still regularly topple my own high score as I continue to improve at the game despite the many hours already spent with it.

Most interesting, though, is Forget Me Not’s noises. It has no music, per se, but a cacophony of unique, droning noises creates an ever-changing and organic backing tape to each level.

Sadly, I didn’t write anything about Forget Me Not this year, but James Dilks offers a pretty decent review of it at Kill Screen. Gems like Forget Me Not are precisely why I love iOS gaming. I want you to play this game.

Gears of War’s strength is in taking cover, being pinned down by a swarm of enemies, and slowly-but-surely progressing against them, fighting for every inch of land as you scamper from cover to cover. Every time Gears 2 found this focus, it lost it again, almost as though Epic were afraid players would get bored without some gimmick. Kind of like Mario players get bored of jumping (i.e. they don’t).

So Gears of War 3’s campaign fixed this up dramatically, as I hoped it would. Nearly the entire campaign is the fundamental take-cover-and-shoot-things play with just a few novelty segments mixing it up without completely destroying the pacing. Ultimately, Gears 3 finds the rhythm that Gears 2 completely lacked.

That said, it does have some generic boss battles (and a terribly boring and frustrating final boss), and while I found the story and thematic content compelling enough, I seem to be in the minority on that one.

Horde Mode 2.0 is also an interesting upgrade. I was initially wary of its pseudo tower defence features, but I grew to love them with the many, many hours I’ve spent in both private and public matches. Once I catch up with all the other releases of late 2011 I’m yet to get to, Horde 2.0 is what I’m most excited about returning to.

I wrote a sprawling review of Gears of War 3 for Pixel Hunt with more thoughts that wouldn’t fit inside a blog post. Ryan Kuo wrote an interesting piece at the Wall Street Journal blog about what Gears of War 3 ‘really’ means, and Maddy Myers successfully takes on the unenviable task in analysing Gears of War 3’s inclusion of female characters (finally). 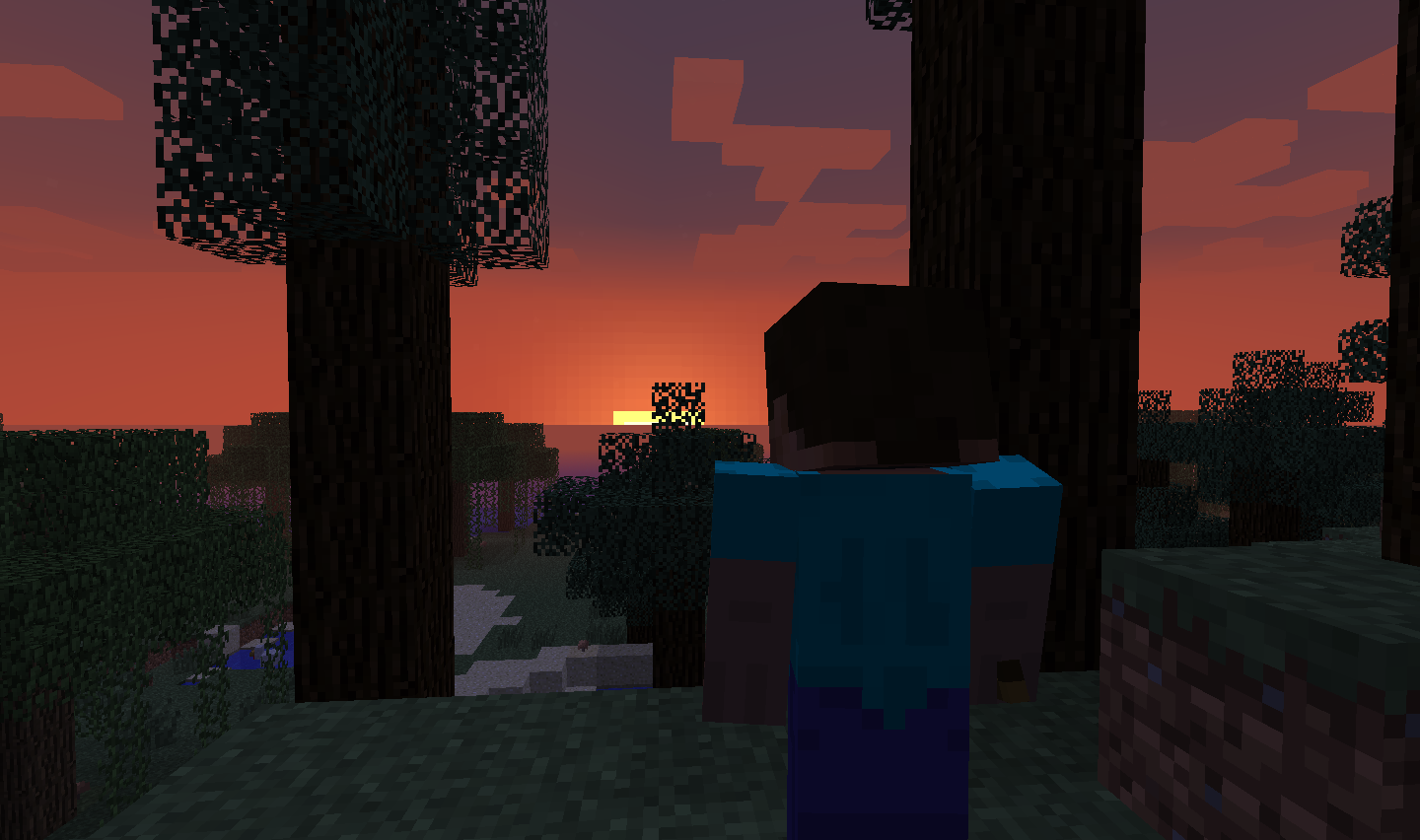 Minecraft is going to miss out on a lot of GOTY lists this year as many will argue that it was already out last year. Meanwhile, it missed out on a lot of GOTY lists last year because many argued it wasn’t technically out yet. For me, I have no qualms putting it on a GOTY list for each year. The updates to Minecraft in 2011—up to and including the eventual 1.0 release—have revolutionised the game we were all playing last year. Each new and refined feature such as the hunger bar, tuned biome algorithms, endermen, underwater caverns, powered rails, etc. have highlighted and focused Mojang’s game. It has remained resolutely Minecraft throughout its development, even as it changes what Minecraft is.

I still spend more time playing Minecraft than any other game (except perhaps Skyrim) and the vast majority of that time I am just exploring. Though, this year my girlfriend and I started our own private server, and I have finally begun to appreciate the pleasures of building. We have our home, a farm, another home, and just recently built an extensive railway between the two.

I wrote a lot about Minecraft this year. In Hyper 220 I wrote a feature about the phenomenon of the Minecraft community making “suggestions” as to what Notch and Mojang should add to Minecraft. In the same issue I wrote a review of Minecraft, and it is the first perfect score I have ever given out. I also wrote about the Beta 1.8 update for Games On Net (easily the most significant of all the Minecraft updates) and Towards Dawn, my nomadic adventure, is still going after taking a many-month hiatus through the middle of this year. I’m not sure of much else written about Minecraft this year, but Kris Ligman does have an essay at Dire Critic called “The Map and the Territory” that is both interesting and somewhat related to Minecraft.


And so ends Part Four. Tomorrow we wrap things up with my top four games of 2011.
Posted by Brendan Keogh at 6:58 PM

I really love action games and Here listed games are very nice. I am having lots of collection of action games.Gears of War 3 is one of my favorite game and Hope it will come with next version because I am very exciting to get this new version.

Sounds interesting of Gears of war. I have played this game once. All weapons and controls are really amazing. But i couldn't play it more due to problems in my console. I wish that this game is compatible at Wii mode.

Insight this post really very huge list of best game of 2011.Forget me not is my favorite gane. I really like sound of this game. Movement and shooting are both automatic, leaving the player to only have to worry about steering. Enemies are greatly varied and often end up fighting each other, too, while explosions can destry who segments of the world itself.
boot camps

Hope my ringtone will please you. Visit my homepage to find the best ringtone here: https://ringtonesmobile.net/

Share with the people to get the best free ringtones and quality. Hope my new update brings a new look to the ringtone world. Thank you for your attention.

I don't like playing games very much. I like to collect songs and ringtones. Why do today's young people like games so much? is because of its attractiveness. This is a cheap pastime hobby, easy to play with sounds that are very lively graphics, eye-catching, novel, suitable for the personality of young people. In a sense, games give us some benefits. Playing electronic games helps train thinking, sharp, handling situations in a creative and skillful way. Moreover, it gives us perseverance and patience. A very important thing for games to attract young people is the thrill of playing. The more you play, the more interested you are, the more curious, and the more satisfied you are when you play a certain game, very suitable for the new age mentality, love to explore and enjoy things. new.

Does anyone like the sound effects of these games? I often set it as a ringtone at https://ringtonescloud.com/