At the end of 2010, in lieu of any kind of “best of 2010” list, I wrote a series of posts with some rough thoughts on the games that made my year. This year, I thought I’d go a step further and do a somewhat ranked list of my top 20 games (in five parts of four games each) along with some rough thoughts on each of them. I stress that this isn’t an exhaustive “best games” of the year but rather just my personal favourites out of those I have played. Hopefully I can give some interesting insight into what I loved (and what I didn’t) about each of these games.

I’ll also link to articles related to each game that I wrote and/or read during the year. However, I’ve been a dreadful reader this year and have surely missed many great posts about each of these games. So please leave comments with links to any relevant articles and I’ll add them in.

But before I start, it's been a such a huge year for videogames that there are plenty of games that haven't quite made it into my list. So, tied at number 21 are: Jamestown, Space Marine, Game Dev Story, Superbrothers: Swords & Sworcery EP, From Dust, Drop 7, and LittleBigPlanet 2. And now, onto the top twenty!

Uncharted 3 is one of the few games on this list that are both among my top games of 2011 and my biggest disappointments. Individual scenes and stages are phenomenally directed and paced and easily surpass Uncharted 2’s many already awesome scenes. Escaping the burning mansion and sinking cruise ship in particular were high points. Everything is bigger and better and exploding twice as often.

But the overarching story is lacklustre and deflated. It starts somewhere mildly interesting and then goes nowhere with it. Many threads are left unconcluded, and the few conclusions it does have fizzle rather than explode. Half the game—especially the whole pirate segment—just feels like a tacked on “Deleted Scenes” DLC with no connection whatsoever to the plot. The game ended and the first thing I thought was “That was it?”

Yet, the superb acting and animation is still there. The superb action and set pieces, too, but it’s all just floating with nothing to hold it together. With a tighter narrative threaded through its individual segments, Uncharted 3 could be much higher on this list.


19. The Binding of Isaac (Edmund McMillen and Florian Himsl) I won’t lie: if The Binding of Isaac had not been developed by half of the Super Meat Boy team, I probably would have paid no attention to it. But McMillen’s involvement in the project along with the idea of a “twin-stick shooter rogue-like” got me hooked. The setup of the game is equal parts disgusting, grim, and absurd: inspired by a very loose reading of the bible story of the same name, Isaac has been imprisoned in a hellish basement by his crazed, voice-hearing mother. He must fight waves of enemies by shooting them with his tears as he descends the floors for his final confrontation with Mother.

Despite being more accessible than your typical rogue-like, Binding of Isaac can still be unforgivingly hard and how far you get in your single life will often be determined as much by pot luck as by player skill. As you proceed through the procedurally generated floors, you’ll find randomly placed powerups (and powerdowns). Some will powerup your tears, some will make them boomerangs, some will make them bloody, and others will make them seek out targets. You will die and fail many times before you finally make it through all the floors to the boss battle with mother, and you will probably die there several times before you finally beat her. That so much of it comes down to luck is what I found so strangely compelling about The Binding of Isaac. Maybe next time I’d find more heart containers and useful powerups. Maybe.

The game does have some weird issues, though, such as terrible slowdown when more than a few enemies are on screen at once (unless this has been patched in the past few months), and I would much prefer to be playing it on a console with a controller and a couch than having to wrangle with my keyboard, but both of these can be overlooked for what is probably the best game I played this year that cost less than five dollars and wasn’t on my phone.

Drew Dixon’s review of the game at Paste is perhaps one of my favourite reviews of the game as Drew struggles to come to terms with his own enjoyment of the game alongside his own Christian faith.

For the second quarter of this year, I was obsessed with Tiny Tower. I would check it while walking to the bus, while sitting at my computer, while waiting on the loading screens of other games, while talking to people, while eating dinner. I was fully aware that it had been designed in a way to be addictive, to try to get people to spend money on the micro-transactions that essentially meant you could progress without playing. But Tiny Tower had one flaw: I actually enjoyed playing it. The simplistic, meaningless, never-ending micromanagement was an almost meditative activity. In the months I played it, I never once considered spending money to speed up the process. I was enjoying it too much.

There is little to do in the game other than stocking shelves and running the elevator. Still, the adorable little bitizens, the simple UI, and the perpetually running game clock (always there in your pocket, always ticking away) made it impossible for me to stay away. I got to about floor 85 of my tower before I stopped, and even now I often consider going back. The only thing stopping me is the knowledge that if I started again I wouldn’t stop for months.

Many hated Tiny Tower. Some (justifiably) claimed it was as unethical as any other free-to-play micro-transaction game in the Farmville mould, that it was an evil thing crafted in a way solely to remove the money of those too impatient to actually play. Others (unjustifiably) argued that it isn’t even a game at all because there is no challenge and no goal, and this is just rubbish (Secondpersonshooter has a good guide to the “X is not a game!” claim and its stupidity). Tiny Tower is excellently and expertly crafted, both in terms of game design and consumer object.

I wrote a review of Tiny Tower for Paste, highlighting its ambiguous ethics and my love of it regardless. Jorge Albor focused more on the ethics (or lack thereof) of the game in his excellent post at Popmatters. Michael Abbott, meanwhile, has a clever piece at Brainy Gamer which I feel many of commenters have misread (or I have misread!). They seem to think he is legitimately complaining about the game, whereas I read his piece as a satire of those heaping the hate. Either way, it is a good read.

But my absolute favourite piece of Tiny Tower related writing this year was J.P. Grant’s article at Infinite Lag where he analyses Tiny Tower through Fredrick W Taylor’s “Theory of Scientific Management”. It’s a really great read and I strongly recommend it regardless of your feelings towards the game. 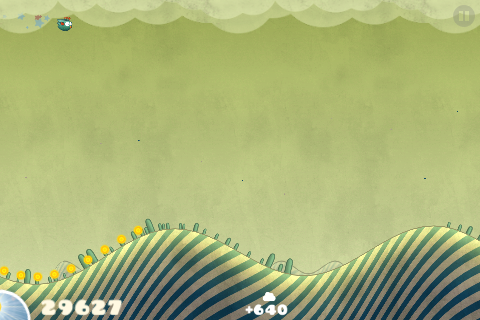 Another iOS game, Tiny Wings was one of the many great single-button, get-as-far-as-you-can games to come out this year on the iPhone. I’m not sure if we are still calling this genre “Canabaltesque” (as a nod to Adam Saltsman’s Canabalt) but I’m going to be calling it that for now. Anyway, Tiny Wings, own unique spin on the Canabaltesque formula is a bird whose wings are too tiny to fly. Instead, he slides down hills in order to launch himself temporarily into the air by doing massive jumps. A touch of the screen tucks his wings in and sends him plummeting towards the ground, while not touching has him flap his wings frantically as he tries to get airborne. The trick is to line up his descents with the hills to get the maximum slide and leap off the next one.

The audiovisual design is charming and uplifting, and the entire game has a really positive atmosphere. It isn’t about a bird who can’t fly; it’s about a bird who is going to fly whether his wings are good enough or not, damn it.

Sadly, though, the difficulty spikes terribly around the sixth island (even after a patch), which makes it very east to give up playing. Still, Tiny Wings can very much be seen as the forerunner to the many other interesting and high quality Canabaltesque games that graced the iPhone this year.

I wrote this little pseudo-review of the game, with a focus on the game's positive attitude, from my GDC hotel room after having spent much of my flight from Brisbane to San Francisco playing the game. Also, my favourite piece of videogame-related art is a Tiny Wings piece. Check out Daniel Purvis's illustration for Hyper #212.


And that's it for Part One. Continue on to Part Two!
Posted by Brendan Keogh at 3:54 PM