So continues my countdown of my personal top twenty games of 2011. This is the second post in the series, leading on from Part One.

Dark Souls is an incredibly difficult action RPG. Well, then again, ‘difficult’ is perhaps the wrong word. Perhaps ‘demanding’ is more accurate. Dark Souls demands you figure things out for yourself and will punish you every time you don’t, every time you decide you can do something solely because you are the player and you want to. It’s like the school master with a cane whipping kids who don’t learn their times tables. It teaches its lessons by punishing you and making you do it again.

More important than training your character in Dark Souls is training yourself. You must figure out when to parry, when to counter, when to wait, when to pounce. There is a fluid link between controller and character that leaves you feeling in control of your character’s movements like few other games do. Consequentially, when you fail you only have yourself to blame, and when you succeed, the glory and the praise is all your own. You fight and bleed for each pixel gained in Dark Souls and the smallest progressing feels like the ultimate accomplishment. When I completed the game’s very first boss, less than an hour into the game, I gleefully and earnestly tweeted my feat in full caps, I was so excited.
Level design, too, deserves to be applauded. What originally seems like a linear experience opens up and links back together as you progress and open the world up. The way a drawbridge opens or a ladder extends or a door unlocks to place you two steps from somewhere that was previously two hours away shows incredible foresight in design.

What is perhaps most interesting about Dark Souls is that it proves that not every game has to be for everyone in order to be commercially viable. Unfortunately, however, the flipside of this is many people making the absurd claim that Dark Souls proves that “hardcore” games are better and “they just don’t make them like they used to.” I hate this way of thinking, the idea that most of today’s games are bad solely because they can be played by more people. But still, I am glad that games like Dark Souls are still able to exist.

Perhaps the most nuanced and articulated discussion of Dark Soul's unique difficulty that successfully goes beyond a simplistic "hard equals good" came out just today in Chris Dahlen's detailed analysis of Sen's Fortress, a part of the world I never got to. I wrote an article for Gameranx about how Dark Souls’s audiovisual and thematic design justify its mechanical design of essentially grinding. I was really happy with how this article turned out. Still, not long after I wrote it, after about twenty hours of playing, I decided it was time to give up—Dark Souls had beaten me. But just last week I read Simon Parkin’s absolutely excellent retrospective on the game at Eurogamer, and now I can feel myself being tempted back to it… 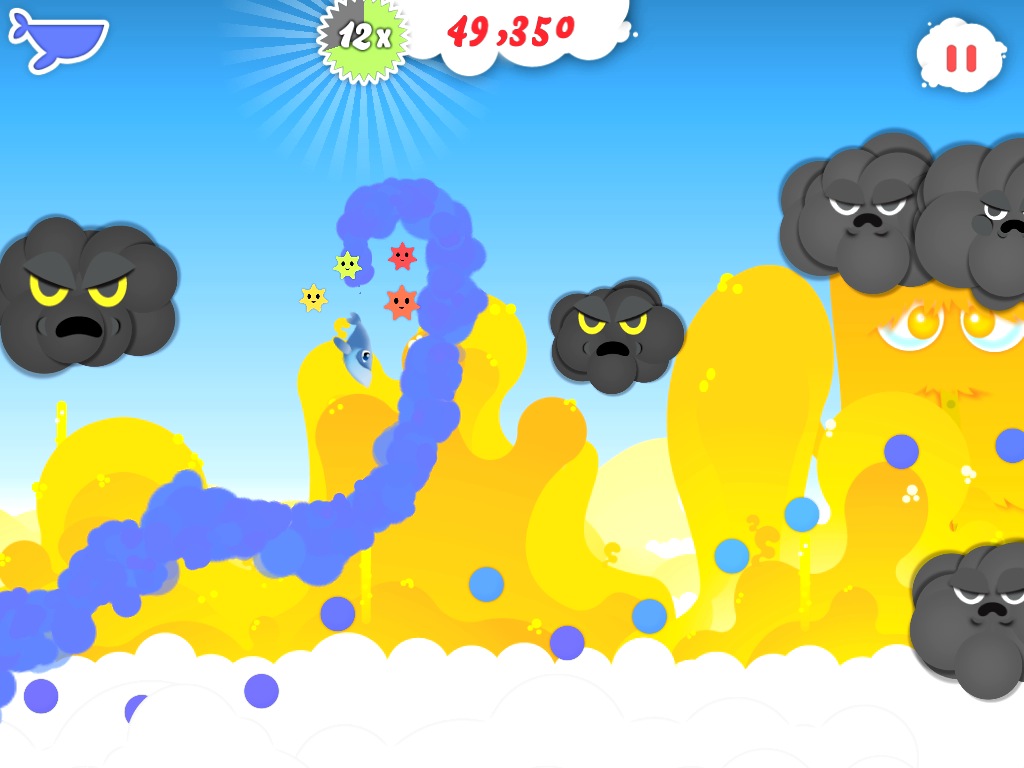 Yet another Canabaltesque for iOS. I was ready to dismiss Whale Trail as an inverted Tiny Wings try-hard. The cuteness seemed forced and superficial and it undoubtedly lacks the focus and soul of Tiny Wings. But beneath the dumb cuteness is a very tight mechanical experience. After spending a bit of time with it, I came to love Whale Trail as its own unique Canabaltesque game with its own challenges and innovations.

It is not about getting as gar as possible so much as it is about keeping as closely to the path laid out for you as possible. Collecting bubbles give your whale flying fuel (or something) and, more importantly, increase your score’s multiplier, while hitting clouds decreases it. So you want to fly the whale as closely to this path as possible. The opposite of Tiny Wings, not touching the screen will send the whale downwards, while touching will have him fly upwards, and holding for a longer period will have him do a loop-de-loop.

Controls are tight and you have a surprisingly high level of control over the whale’s route. Though, the game does have one major set back in its flawed scoring system. Your multiplier goes up as you collect bubbles and down as you hit clouds, but as bubbles become more sparse and scattered as the game progresses, the possibility of regaining your multiplier after hitting a cloud becomes less and less likely. If you haven’t hit your high score before you hit your first cloud, you might as well quit there and then. A sad oversight in an otherwise great little game.

There are not too many single-player videogames that you can ‘lose’. You can die in plenty of them, to be sure, but you can’t straight out lose in too many of them. This more than anything else is what makes Atom Zombie Smasher stand out: you can—and probably will—lose many times before you eventually win. But this isn’t a little game like Binding of Isaac where losing a game means you have lost a five or ten minute game. A game of Atom Zombie Smasher could take an hour or more before you finally accept you are going to lose.

This is how Atom Zombie Smasher manages to be one of the most horrifying, desperate, and depressing zombie games I have ever played. This despite the great level of abstraction in the games visuals, with humans represented as yellow dots and zombies as pink dots. The goal is to rescue as many humans as possible from a city slowly but surely being overrun and infested. Those you leave behind will be infected and contribute to the zombie AI team’s score.

Odds become increasingly depressing as the zombies take over more and more territories in greater and greater numbers. Often, you find yourself playing a zero-sum game, willingly destroying many innocent lives just to keep back the zombie tide for another day.

There’s something horrifying about the birds-eye view, too. About that final group of yellow dots swarming around what will surely be the last helicopter out of there as the purple hordes close in. You can imagine the violence and chaos as the last fifty humans try to fit on a helicopter that can only carry twenty. It just goes to show that you don’t need blood and gore for a good zombie tale—your imagine can do just fine by itself.

“2D Minecraft” is an unfair oversimplification of what Terraria is, but it sure is a good way to sell copies. Certainly, Minecraft is Terraria’s obvious main influence, but Terraria takes the base fundamentals in a totally different direction. Where Minecraft is about using a few base instruments and simple resources for whatever you wish, Terraria is about using a vast variety of resources to craft a vast variety of instruments to then find different resources to then craft different instruments. Grappling hooks, health upgrades, harpoons, flying boots, laser guns, etc. Etc. Where Minecraft is less about any kind of progressing and more about existing, Terraria is far more about progressing. The special weapons and areas and occasional boss battles craft a slightly more directed experience than that found in Minecraft.

It’s an interesting formula that says as much about what Minecraft is as what it isn’t, and it led to to crown Terraria as an anti-Minecraft in my review for Kill Screen. Terraria is the first of the inevitably many games that will follow in Minecraft’s wake. It is not a clone, but a contributor to an exciting new genre.

Dark Souls is my favorite game and it's on top in my list :) (:
its a different type of game and I love demanding games rather than easy games Whale trail :)
thesis paper writing