Bastion: A Review and Some Further Thoughts on Choice and Inevitability

Firstly, I wrote a review of Bastion for Paste Magazine. You can read it here, and perhaps you should before you read the rest of this post so I don't have to repeat myself. But if you don't feel like it, here is a run down: Bastion is an utterly beautiful and melancholy game that makes you care for a world that no longer exists. There. That should be all you need for the rest of this post. Also, the rest of this post will contain spoilers for both Bastion and Grand Theft Auto IV so perhaps don't read on if you are yet to complete Bastion at least once.

At the end of Bastion you have to make a couple of choices. The first one is potentially heartbreaking, but not relevant to what I want to say here so I won't go into any details. The second one is what I am concerned with here. At the end of Bastion you can choose to do two things: either rewind time to before the Calamity ripped the world to shreds, or use the Bastion as some kind of airship to fly off and find new lands. However, both have consequences. If you rewind time and 'unbreak' the world, 'you' will cease to exist anymore. The Kid, Rucks, and Zia will have no memory of the post-Calamity world--something that would be hard enough to give up if Zia did not admit right towards the end that she has only ever known happiness since the Calamity. Further, there is no guarantee that people will not make the same mistake and simply cause the Calamity all over again. The consequences of continuing on, of using the Bastion as an airship to fly off into the sunset is two-fold: firstly, obviously, it means the Calamity will never be undone. Ever. Secondly (and more vaguely), the world around you will be irreversibly damaged as you take off. Or something. The game is not overly clear on this point but it seems to me that all the beasts and Ura in the vicinity will be destroyed by you choosing to fly off on the Bastion to find new lands. Perhaps I misread this, though.

It was a hard choice to make and, ultimately, I did not feel as though I had 'completed' the game until I played through it twice and made each choice. The first time I decided to turn back time. At that point, it was the obvious choice. Having heard so many stories about the pre-Calamity world from Rucks's tales, I needed to save it--or rather, to give it a second chance to save itself.

The second time through, when I played "New Game Plus" (which is essentially a new game where you keep you experience and weapons and the enemies get more difficult to reflect this), it was clear that this was not a distinct, 'other' game. The continuation of my character as well as some slight, clever changes in the narration made it clear to me that the Calamity had happened again. So on this playthrough, it made sense to make the other choice, to move forward into the future and not to stagnate in the past. It was bittersweet, of course, as it meant saying goodbye to the world I had wanted to visit for two generations of myself now, but it was filled with a sense of hope and optimism. There was me, Zia, and Rucks, and we were going to explore a brave new world.

The beauty of this was the the utter gravity of my choice to say goodbye to the pre-Calamity world was painfully apparent largely due to my previous playthrough. Because of that playthrough, I knew that turning back time yet again was inevitable. We often say that videogame narratives are about being able to answer the "what if" question. "What if I did this, not that." Bastion answers the question brutally by making you see that what happens is not pretty and then asking you to choose again.

Of course, the flaw of this is that not everyone makes the choice in the order I made them. I feel as though the game is attempting to set up the choices to be made in that order by trying to tie you down to the world with Rucks's sweet, sweet voice, but some players will certainly choose the future their first time through. This, then, destabilises the meta-narrative that, for me, ran through both playthroughs. It's a weakness of the story that i feel Bastion was trying to tell but one that is in no way new to videogames: the player will rarely do what the storyteller wants them to do.

Only one other game felt as incomplete until I played it twice and made the different choice: Grand Theft Auto IV. Rockstar's games always have that inevitability streak, but never has it hit me so hard as it did in Grand Theft Auto IV. Towards the end of the game, Niko makes the choice to either work for a man that previously betrayed him (and make a lot of money) or to kill the man for vengeance (and make no money). His cousin, Roman, wants him to take the money. His girlfriend, Kate... well, she doesn't want him to get revenge, but she doesn't want him to take the money, either. Either way, Niko has promised himself, his cousin, and Kate that this is it, that he will get himself out of this sink-pit of crime once he does this One Last Thing.

So the player makes the choice. Long story short, if you take the money (what Roman wanted you to do), then Roman gets shot dead at his wedding; if you take revenge (what Kate kind of wanted but not really) then Kate gets shot dead at Roman's wedding. The way the narrative progresses, both endings make sense based on the choices you made, and both leave Niko devastated at the end of the game's narrative.

The first time through the game you think "what if". What if you had just taken the money? Kate would still be alive. What if you had walked away? Roman would still be alive. So you play again; you make the other choice; and Niko simply loses someone else he loves. It kind of makes Niko Bellic one of gaming's few tragic characters. The utter helplessness of the situation he gets himself in becomes all the more apparent when you make a different choice and end up at a similarly dark conclusion--if you can call an aimless existence in a foreign city with the specter of a loved one haunting you a conclusion.

Neither of these games do this inevitability-through-choice perfectly. Bastion's hinges on makes choices in a certain order for the full impact to hit the player. Meanwhile, many people had enough trouble getting through one complete game of Grand Theft Auto IV, let alone two. But it is something I would like to see games exploit more often.
Posted by Brendan Keogh at 4:49 PM 7 comments

My Thesis. By Others.

When I uploaded a draft abstract of my thesis back in April, I promised I would continue to write updates about it here. Alas, I have failed to do that. In part this is because I've constantly had other writing obligations and in part it has been because the only times recently that thoughts related to my thesis have been coherent enough to publish is when I am actually writing it. At the moment I am struggling through Chapter One, which I'm hoping will allow me to situate where the player-character relationship sits, stradling the fourth-wall between the actual and virtual worlds (or something like this). Anyway, as I have been failing to write anything coherent about it, I have instead been writing incoherent rambles over at Google+ with which to have conversations with people about my ill-formed ideas.

And conversations I have had! Every post has seen a stack of thoughtful engagement and bouncing of ideas back and fourth and has been really useful for my writing and for forming my ideas. Most surprisingly, these rambles have actually got other people thinking and writing in areas related to the player-character relationship. In particular, Adrian Forest has written a blog post at Three Parts Theory called "Inhabiting Game Spaces" which brings together the relationship between player and character in regards to his primary interest in videogame spaces. Further, Kris Ligman has written a post at Popmatters about videogames, characters, and fourth walls and in doing so has rendered one of my incoherent rambles coherent. Both posts are an excellent read and in a weird, cyclical, nonlinear, new media kinda way, will hopefully end up being cited in my final thesis.

As for my rambles, if you wish to read them yourself, let me know and I will add you to the appropriate circles on Google+.
Posted by Brendan Keogh at 5:32 PM 1 comments 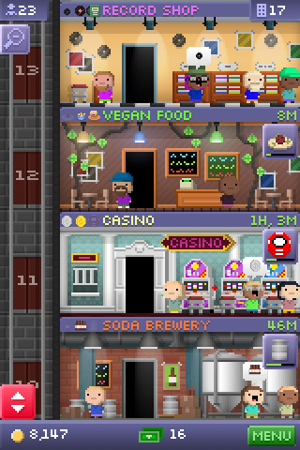 I have been playing the horrifically addictive iOS game Tiny Tower an awful lot lately. To justify the many, many hours the game has taken away from me, I went and wrote a review of it for Paste Magazine that you can read here.

While I was predominately positive in my review and gave the game a good score, the design of the game is potentially problematic and ethically unsound. Jorge Albor wrote a great piece for Popmatters discussing some of the (very valid) criticisms of Tiny Tower that my review just skims over, and follows it up with a few more remarks at Experience Points also worth reading.

Ultimately, Tiny Tower is 'addictive' in the most literal sense of the word, not in the casual 'really fun' sense that we tend to use in writing about videogames. It is designed in such a way that not playing it becomes more and more difficult the more you play it. Truly, it is like a drug: an unarguably enjoyable experience that probably isn't really good for you to do too often.

Anyway, I won't waste more words repeating Jorge or myself here. I find it interesting (and perhaps worrying) that I am enjoying a game so much despite the flaws that I am completely aware of.
Posted by Brendan Keogh at 10:36 PM 0 comments