A few weeks ago when I bought a friend's old, secondhand 3DS, someone asked me if I was excited about New Leaf, to which I responded: "What is New Leaf?". Nintendo generally and the 3DS in particular have been a blindspot in my knowledge of what is going on in videogames for many years now and I had not even heard of the new Animal Crossing game—nor had I ever played an Animal Crossing before! Over the following weeks, my Twitter feed was slowly taken over by people playing it and, as I learned more about the game, I got pretty excited for it myself. When it was finally released here in Australia on Friday night, I downloaded it and started playing.

I don't know exactly what this blog post is. This games seems like something that is going unfold incredibly slowly and gradually and might not fit a post-play reflective kind of 'Notes' post. Instead, I guess it is an exploration of my first days of Animal Crossing as told through my inconsistent use of the 3DS screenshot function. If you, like me, have absolutely no prior experience with the series, maybe this will give you some insights. 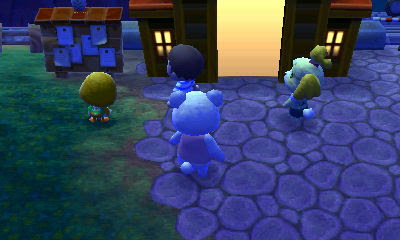 It was about 10pm when I arrived in the town of Biddyton. 'Biddyton' because I asked my girlfriend to "think of a word that implies 'cute'" because I understood that Animal Crossing is pretty cute. She thought of Biddy the hedgehog and that was that.

I normally play a woman in any game where I can choose my own gender. There's a whole heap of reasons for this. But Animal Crossing seemed like one of those individualistic games about you so I went with a guy. It seems incredibly weird and more than a little bit problematic than in such an individualistic game you have no choice but to be white, however.

I wandered around the late night of Biddyton for a while. Everyone was walking around and chilling out, probably excited by the hustle and bustle of their new mayor. 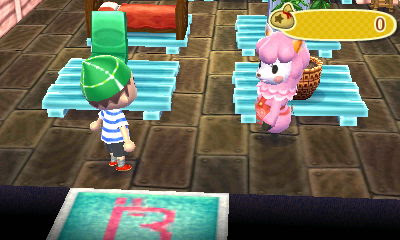 I found the Re-tail store. Then I went out again, picked a whole heap of cherries, then went back and bought myself a bed. 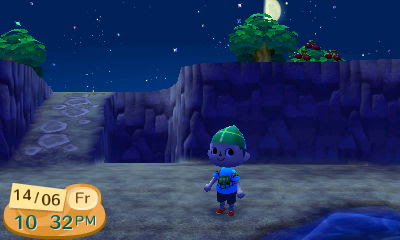 There wasn't a whole heap to do since everywhere was already closed, but I really wanted to play this game so I just walked around a whole heap. It was my undoing: 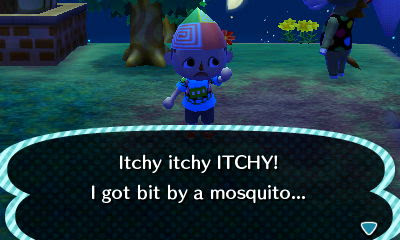 An hour later even Re-Tail had closed, but some of my peeps were still just out and about One of them gave me a striped shirt to wear. Then I made a pretty terrible hat. 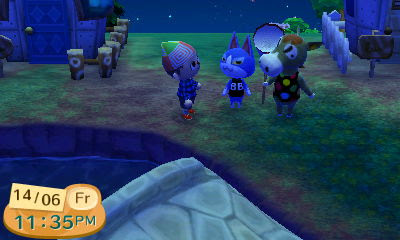 Eventually, I accepted there really wasn't anything for me to do. 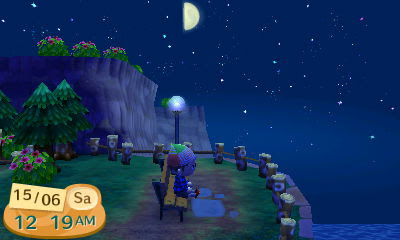 The real-time gameplay is really interesting. I have experienced it in other game in the need to wait for certain lengths of real time for a task to be completed (like in Tiny Tower) but this coupling of the game world to the real-world time is really interesting. On one hand, Animal Crossing is the kind of game you can play for as little as a few minutes a day. On the other hand, it demands you play at certain times to actually do things. It's somehow more flexible and more demanding than a typical game.

I already have a habit of returning to my house when I stop playing. So I walked back to my tent, laid down on my new bed, and closed the 3DS. 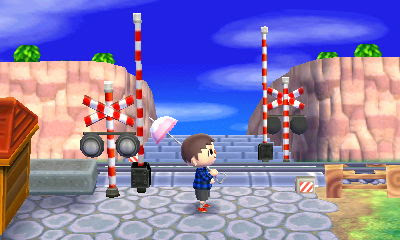 On Saturday I got a new parasol, apparently. I... have no memory of this happening. 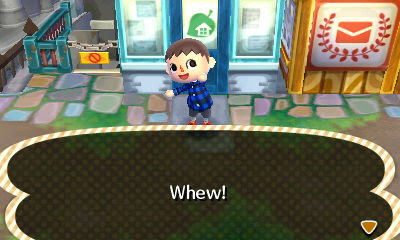 Now that the shops were open, I was able to put the downpayment on my house. My character was really happy about this.

Also on Saturday I participated in the Bug Off, where I had to catch a good bug before 6pm. Again, the  coupling to real-time is super interesting. By 6pm of the actual day, the competition would be over. Then I would have to attend the ceremony before 9pm. Stressful! I ended up taking my 3DS with me in a coat pocket out to a birthday party in a bar. Even then, I only came third as I hadn't had time to chase bugs from about 3pm. Animal Crossing is more punishing to people with actual lives than even a typical game! 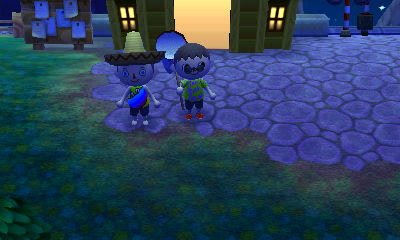 On Saturday night I checked my station and saw I could visit Brandon's town, and so went on my first inter-town travel. He gave me some oranges and I felt bad for not having brought any cherries with me. Apparently fruit can be sold for different amounts in different towns. Supply and demand. I also felt awkward about not knowing proper etiquette for being in someone else's town. Multiplayer stresses me out. 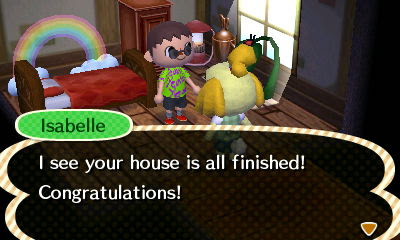 On Sunday my house was completed and I moved out of my tent! 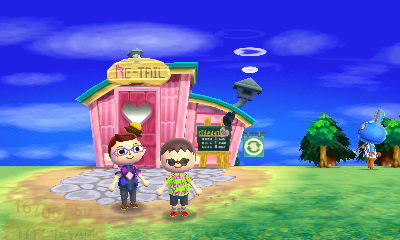 On Sunday morning I briefly visited Hammond, but then his friend came for brunch and I had to go home again.

After I posted the above photo on Twitter, Daphny commented on my "Morpheus glasses" and I lamented on my lack of cool fashion. She invited me to her town, Farrrrrt, and I went over and grabbed some cool new clothes. Her amazing town flag had me in high hopes that I would head back to Biddyton decked out in some pretty trendy clothes. 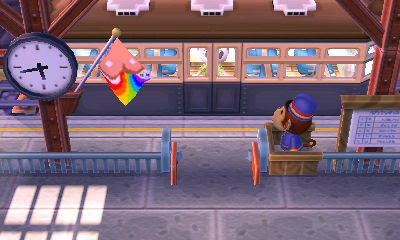 She met me at the station! 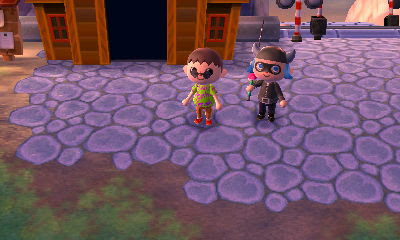 We went and saw the hedgehog ladies who sell clothes and she let me take whatever designs I wanted. I was still nervous about multiplayer etiquette and I wasn't sure if I was stealing things but it seemed like I could take designs and also leave designs there. I don't really understand how clothes work so far. I have clothes items but I also seem to be able to just apply materials to my character. Regardless, I got a cool Ghost Bro shirt.

I also went to her shop and, after asking permission, was able to buy a fishing rod to take home! 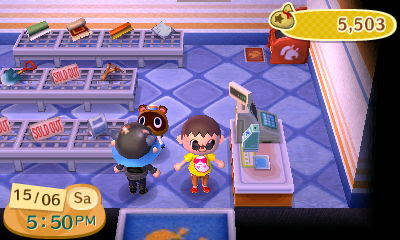 Daphny scared me with a Zelda mask and then I said I would go home. These two events were unrelated! 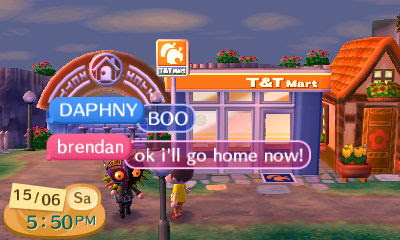 Back home, I used my new fishing rod to test out fishing. Then I just walked around my town in my new clothes and spoke to my peeps. 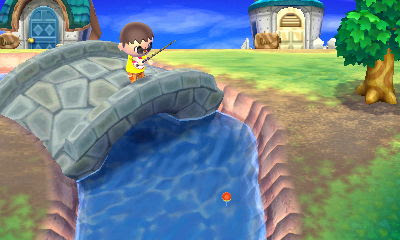 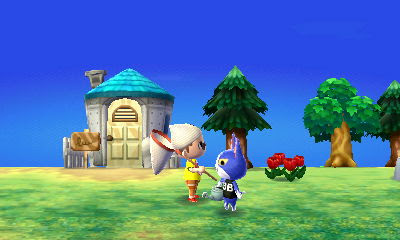 Oh yeah I almost got a new hat. 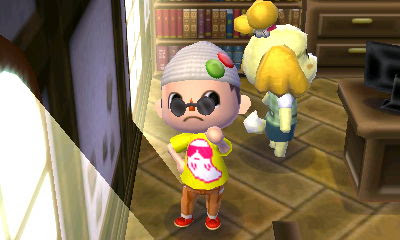 One of my peeps, Tutu I think her name is, wanted to see my house. She came over and I went to bed. 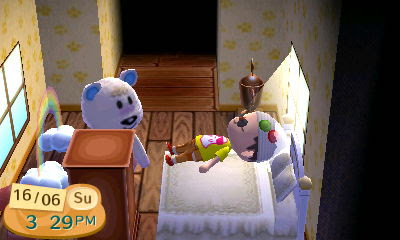 Then I ran down to the beach and spent the rest of the afternoon fishing. So that is my first few days of Animal Crossing: New Leaf. I had nothing to do because it was too late, then I got stressed out by time constraints, then I chilled out with some friends and did nothing. So far it is a lovely, mundane, and slow moving game. The kind of game I would describe with the word 'nice' and actually mean it.
Posted by Brendan Keogh at 1:31 AM

hi I really enjoyed your walk through. I just downloaded the game a few hours ago and ran into similar problems. I got the game around 10pm, and after I had planted my tree everything was closed. I couldn't buy a bed for my tent. I ran around and picked peaches. I am excited about how this game will pan out. I have heard good things from other people and figured it would be fun to play myself.

You created some decent points there. I looked over the internet for any problem and found most individuals goes as well as with your web site. Eminem, also known as Marshall Mathers, is one of the most commercially successful rappers of all time, with more than 100 million albums sold worldwide. He is one of the richest rappers in the world, with an estimated net worth of $210 million. Visit Eminem net worth for more information.