Game stories, like all stories, follow the structure of beginning-middle-end. The beginning introduces the characters, status quo, and the conflict the characters face that disrupts the status quo; the middle places challenges along the characters’ path as they try to resolve the conflict; and the end is where the conflict is ultimately resolved (one way or another) and the status quo is reinstated (or a new status quo is reached). This is the narrative arc and is the thread that stitches the stories various scenes together. The story starts at an arbitrary point, rises in intensity towards the climax of conflict, and then drops again as the conflict is resolved. It may have small bumps along the way as minor conflicts present themselves and are resolved along the way, but it all contributes to the underlying arc. Very broadly, all narrative arcs look something like this: 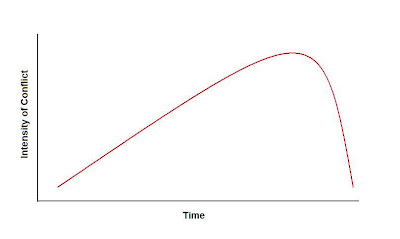 The speed at which a story moves along its narrative arc is its pace. Pace to a story is as beat to a song. Without it, the story trips over its own feet and unravels into a random heap of disconnected events. A well-paced narrative arc does not peak too early, does not drop too late, and most importantly, does not flat-line.
Film has found a pace for their medium that works and has been accepted as the convention to which nearly all films comply: a two-hour narrative (give or take) with a slow build of conflict that reaches its climax around three-quarters of the way in. This pace works and, as long as it is maintained and does not flat-line, holds the audience’s attention well enough to allow the entire narrative to be consumed in one sitting.
Shorter videogames have adopted the filmic pace appropriately. Metal Gear Solid, for instance, is a brief, concise, single conflict in a single environment that paces itself along the traditional beginning-middle-end narrative arc well enough. The intensity of the conflict slowly builds throughout the game, and the climax never feels too far away. It is not entirely unheard of for people to complete Metal Gear Solid in one sitting.
However, the vast majority of game narratives are many times longer than those of film, taking anywhere up to and over a hundred hours to complete. Stretching the narrative structure of a two-hour film over even a twenty-hour game produces a diluted experience that takes too long to get started, grinds perpetually in the middle, and eventually reaches a conclusion that does not seem to warrant the time taken to get to it. The audience can tolerate waiting ninety minutes for the climax of a film, but waiting twenty-five hours for the climax of a videogame is unbearable. So what is a pacing model that could work for game narratives?
There is another narrative form that stretches a narrative across tens of hours: the TV series. If a single episode of a series is an hour long and a series consists of four ten-episode seasons, then that is a forty-hour narrative arc. Just like most videogames, a TV series is not intended to be consumed in one sitting. A TV series is not merely a forty hour narrative chopped into forty, consumable chunks. Rather, each episode works as a self-contained micro-narrative that also contributes to the broader, meta-narrative arc of the whole series. The status quo is not reinstated at the end of each micro-narrative episode, but a new status quo is reached from which the following episode can begin. Each episode is its own micro-narrative arc of beginning-middle-end threaded along the arc of the meta-narrative. Something like: 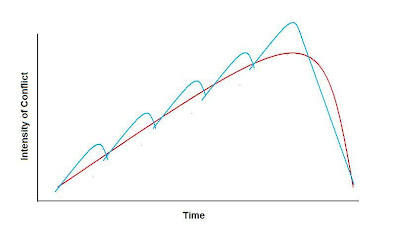 Just like TV series, games too split their narratives into smaller chunks: levels. In the same fashion as an episode of a TV series, each level of a game is a section of a broader narrative, but also requires its own micro-narrative arc in order to keep the game properly paced.
Uncharted 2 does this beautifully. Every level is a fully self-contained narrative with a well-paced beginning-middle-end that also contributes to the game’s overall meta-narrative. Every level follows a similar structure: the slow, stealthy introduction to the environment and goals as Drake sneaks in; the climactic conflict as something goes wrong; and the desperate rush to get out alive. Instead of beginning each subsequent level at the intensity of conflict reached in the previous level (i.e. starting with a shoot-out because the previous level ended with a shoot-out), Uncharted 2 beings each new level at a new status quo more intense than the previous level’s beginning but less intense than the previous level’s end. This allows Uncharted 2 to climb the meta-narrative arc at a consistent pace as each level begins with an actual beginning and each level rewards the player with its own climax and resolution. This keeps the pace consistent and steady, and prevents the player’s interest from waning.
Left 4 Dead is another excellent example with tangible micro-narrative arcs built into the very architecture of the levels. Each safe-house acts as the status quo at which one micro-narrative is resolved and the next one begins. Between each is a mad dash, each more difficult and intense than the last with increased types of special infected, scripted events, and a depleting supply of medkits and pain pills. The micro-narrative dash from safe-house to safe-house culminates in the finale event that acts as the climax for the meta-narrative of the entire game.
Assassin’s Creed, conversely, is just one of many otherwise-good games marred by its flawed pacing. I often consider returning to the game for a second playthrough, but I am unable to tolerate the long, boring introduction before the world opens up to me. Then, once the game finally ‘starts’, it is essentially just a grind until the assassinations are complete. There are no climaxes to keep me interested, no important character developments, just one constant slug through a list of hits. Arguably, each assassination is its own micro-narrative; however, there is no sense that the status quo is readjusting or that the conflict is escalating towards a crescendo. Assassin’s Creed is paced like this: 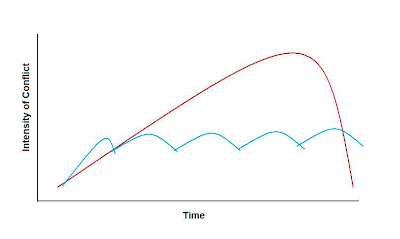 I enjoyed the gameplay of Assassin’s Creed; I really enjoyed the style and characters and writing, but because it failed at pacing its narrative, I have been unable to return to the game. It must be noted, though, that Assassin’s Creed is an open-world game while Uncharted 2 and Left 4 Dead are linear and more easily controlled by the designer. While pacing certainly becomes exponentially more difficult to manage when the player is free to spend countless hours just exploring, I feel open-world games such as Assassin’s Creed could still harness the micro-narrative within missions. The Grand Theft Auto series attempts this to varying degrees of success. While the player is free to take as long as they want to complete the narrative, the missions themselves work as increasingly intense micro-narratives along the meta-narrative arc. Assassin’s Creed, by comparison, deadlines throughout the middle.
Many games have great stories to tell and interesting mechanics to tell them with, but due to poor pacing, fail to keep the player’s attention for the duration required for the narrative to. While some have overly long introduction/tutorials that attempt to cram in an explanation of every single play mechanic, others stagnate in the middle due to drawing out the action with no climactic reward until the very end. Instead of grinding for hours across a taut, filmic narrative arc stretched too thin towards the one, eventual climax, the micro-narrative structure of TV series gives a longer game the faster pace required to keep the player interested by chopping the narrative into smaller, consumable chunks that each contains its own narrative satisfaction.
Notes: 1. The idea for this post first started in a rambling, musing comment to Ian Cheong's "First Impressions and Second Chances" over at Hellmode. 2. I am fully aware of the gratuitous amounts of innuendo present in this post.
Posted by Brendan Keogh at 1:49 AM

I'm not sure both aren't valid within games. Maybe it's ok for a game to just have multiple stories that are unrelated save for a thread of continuity. I don't think there's any reason that couldn't work. But it needs to be a conscious decision, maybe. I'd agree that it didn't really work in Assassin's Creed, but I'd also argue that a better example of that approach would be something like Oblivion, most of the quests in which were of that "bottle episode" flavour.

That is a very valid point. In retrospective, I probably should have actually given some examples of TV series that highlight what I am saying.

I probably should have worded this better to only cover games and TV Series that thread together one main, continuous narrative over many episodes, such as The West Wing or Lost.

I like your example of Oblivion of a game of the "bottle episode" flavour. Perhaps there is an argument to be made that more open, choose-your-next-mission games such as Oblivion or Far Cry 2 could (and do) in fact use the bottle-episode format like the third graph.

Of course, there is no 'right', prescriptive way to make games. So I should probably be clearer about exactly what kind of games I am discussing.