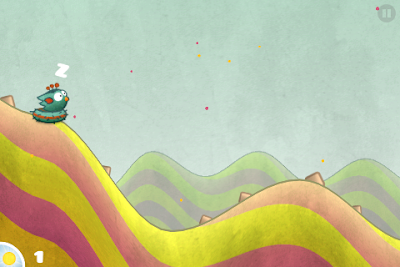 Andreas Illiger's adorable Tiny Wings soared onto the iOS app store this week. Quite suddenly, half my Twitter feed was talking about this charming new Canabalt-esque game (‘Canabalt-esque now being pretty much its own genre). Between downloading the game, playing two rounds, and going back to the app store to give the game a five-star rating, over a hundred new reviews appeared. And what good reviews, too! Players say they love it, that is it beautiful. The compliments are vague and abstract (though, looking back several hours later, the number of reviews has quadrupled and there are more specific comments now, both complimentary and critical), but they mirror my own feeling on the game perfectly: Tiny Wings is lovely, and it makes you feel good.

The premise is that you are a bird who will never be able to fly because your wings are too tiny. But this doesn’t stop our little disproportionate hero from trying anyway. He wants to fly, and he will do it however he can. With a touch on the iPhone’s screen, the bird folds his wings back to plummet towards the ground and speed down hills; when you release, he soars off the incline of the next hill like a stunt jump, flapping frantically. The key is to time your drops to get the most speed and height for the next jump. If you do it right, you might even touch the clouds. 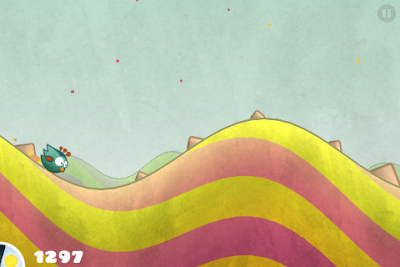 It’s a fun and addictive experience, much like that of Canabalt—as simple as it is complex. But also like Canabalt, the true beauty and depth lies not just in the mechanics, but in the game’s fiction. The character, the visuals, the animations, and the music all come together to make Tiny Wings about a disadvantaged bird who got the arse-end of life but refuses to give up on his dreams. Tiny Wings makes you want to grin and cry at the same time. Ultimately, it just feels good.

‘Good’ in the way the ending of Cool Runnings feels good (at the very least, how Cool Runnings felt good after a few vodkas the last time it was on TV). Just like the Jamaican Bobsled Team, the tiny bird tries so hard and overcomes so many challenges, but can never quite reach his goal—at least not for good. It’s both heart-warmingly uplifting and tear-jerkingly sad to watch your bird launch into the clouds—so happy he has touched his dreams; so sad that it will be so fleeting as he falls back to earth. But the moment he lands he is eager to try again and again and again. 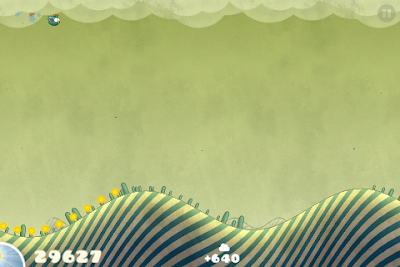 The music, an uplifting twang of guitars and blare of trumpets that wouldn’t be out-of-place on a Polyphonic Spree album, complements the themes beautifully. If the bird’s whimsical cry of joy when he launches into the sky doesn’t make you smile, the music will.

Tiny Wings is a fun game. It is mechanically competent and has an excellent, simple-yet-deep scoring system that tempts you to play over and over again, as all games in the Canabalt genre should. But while these elements alone would make Tiny Wings a great game, it is the emotional investment enabled by the game’s aesthetic design coupled with these mechanics that make it truly remarkable. That little bird never stops trying to reach his dreams, even if he can only realise them for a second at a time. 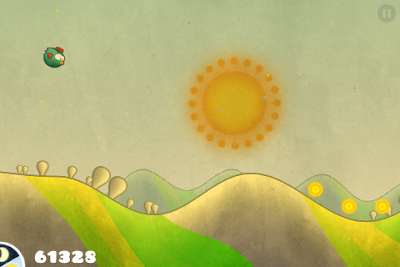 Posted by Brendan Keogh at 8:44 PM