I really like Warhammer 40,000. Not so much the tabletop game (which I suck at) or the miniatures (which I love but, again, suck at) but the fictional universe itself. I love the idea of the Imperium of Man as this futuristic, zealous, fundamentalist movement where humanity itself is the religion. I always found it a fascinating mix of medieval zeal and distopic science-fantasy and continued to devour many novels set among its stars even after I gave up the tabletop game and diverted my funds away from the miniatures to buying more videogames.

Still, despite my love of the fiction, I did not find myself too interested in Space Marine before it came out. I was never too interested in Orks, and as fascinated as I was with the Imperium of Man, I always found Ultramarines to be the drabbest of many drab Space Marine chapters. But then I watched the cinematic trailer (I'm a sucker for cinematic trailers) and had a change of heart when I saw that Chaos would be making an appearance, too. Ultimately, the trailer convinced me that the game successfully captured the feel and vibe of the 40K universe, and that was enough for me.

I'm glad I did because Space Marine is really, really fun. The boltguns feel meaty and the melee is visceral. Shooting and hacking is streamed beautifully so combat slides fluidly from picking off enemy gunners with a scoped rifle to thinning out the hordes with the boltgun before throwing yourself fully into the remainder with chainsword or power axe to pick off those that are left--and there will always be many left. Combat is repetitive and button-mashy, but this quick three-act cycle of distant/mid/close combat gives it a really steady, thumping rhythm that is pleasurable despite its repetition.

The game's feel has been polished well so that the combat is accentuated brilliantly. Orks have this kind of satisfying 'splat' of blood when the fatal bullet impacts them, as though their body expels all the blood remaining in their veins as they die. This offers a vital piece of information to the player, informing them thatone target is dead and they can move onto the next, but it is also, simply, really satisfying to feel your opponents pop like that. It is an odd comparison, perhaps, but the closest game that 'feels' like that to me is Geometry Wars 2. The enemies, when they die, have the same kind of chunk, meaty, splatting nuance to them. This splat is missing from close combat, but that is hardly a problem as it will be a rare occasion that you fell an ork in melee and its body is still in one piece.

Though, unfortunately, the game is still chunky and clumsy in places. The narrative is rarely convincing and poorly communicated to the player. Often, it feels as though the characters have had a conversation while the player was out of the room, and the player is the only one present who doesn't know something. One example: the space marines see a weird ork contraption in the distance and one of them ponders "What is that?!" Minutes later, you are approaching it and your character says "Quickly! We must destroy the ork ram!" Oh, okay. I guess it is a ram then. I'm glad we figured that out and no one told me. It is always minor things, but it jars with the progression of the story in quite a few places. Also, for a game about space marines, there are precious few space marines present. If not for one vox transmission too far into the game's second chapter, I would have sworn the Emperor only deployed three single space marines to take out an ork infestation. Ultimately, the narrative feels like a condiment to the game and in no way integral to it.

Which is odd as the worldbuilding is excellent. Everything feels like Warhammer 40K. The universe, the species, the imperium are all depicted perfectly so that simply engaging with that fiction makes the game enjoyable. The way the space marines tower over the imperial guardsmen, the humility and zeal, the pride and lack of compassion all feel superb. The ork models are vibrantly coloured as though they were picked right out of the pages of a White Dwarf magazine. Everything looks and feels like 40K and this more than makes up for the clumsy, poorly delivered narrative. 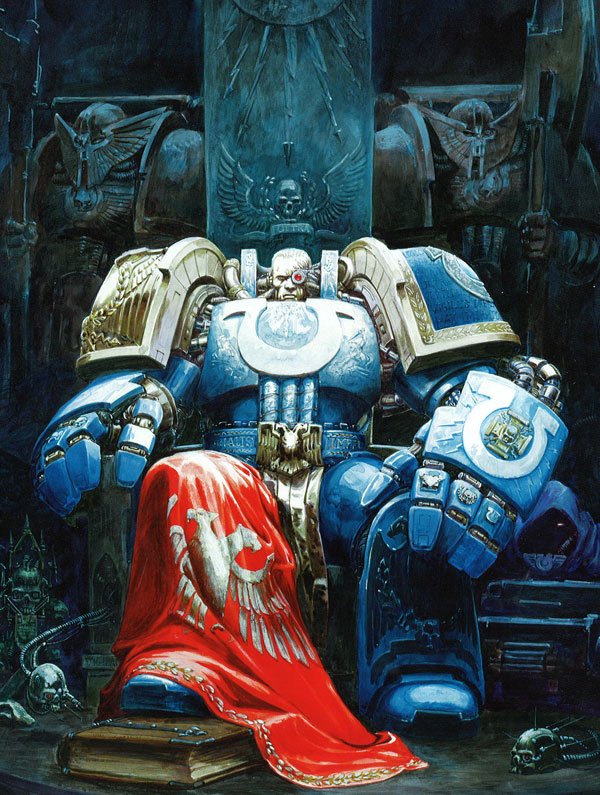 There are also glitches here and there, such as enemies getting stuck on walls or allies teleporting onto lifts or audio diaries playing simultaneously with squadmate chatter. Also, all space marines and orks seem to have come from the same region of England, but none of this gets in the road of the rollicking fun of shooting and chopping through orks. Sadly, though, one thing does: Chaos.

When Chaos rocks up about four chapters into the game, things begin to go downhill insofar as the fundamental fun of combat begins to decline. Significantly, the pleasurable 'splat' of a dead ork is not present with the chaos demons. The demons have a long, drawn out death animation that every single demon plays out exactly the same way when they die as your power axe just keeps swinging through them as though they have already returned to the warp. The few Chaos Space Marines I have fought so far, too, are hardly enjoyable to fight. Your bolts no longer explode in the flesh but ting insignificantly off power armour. The gameplay has been tuned to make fighting orks fun in a 1-vs-1000 kind of style. But Chaos Space Marines are your equal, and this doesn't sit well in the game's framework. Ultimately, fighting Chaos is unsatisfying.

Which is interesting, as it was the presence of Chaos that convinced me to try the game out. But once they appear, it becomes painfully clear that the game was not designed for them. Perhaps a more Gears of War-based cover shooter would be more enjoyable against Chaos Space Marines, as then you could bunker down and fight against them as equals. But Space Marine is designed for you to jump unafraid into a horde of orks and to be confident that you can come out of it on the other side alive and covered in the blood of greenskins.

The game itself seems to realise this. Not long after Chaos arrived, they now seem to have disappeared again as I go back to helping Guardsmen fight the orks. I'm sure they'll appear again soon, though, and hopefully something changes to make them more enjoyable to fight. But for now, Space Marine seems to be a good case study against putting something in a game just because you can. Sure, Chaos fits with the fiction of the 40K universe and they have been as beautifully realised within the game as every other element, but in the style of play that Space Marine demands, they are just no fun to fight. But for now, splatting orks is more than making up for them.
Posted by Brendan Keogh at 11:26 PM

I think this game will appeal to 40K fans who can appreciate the universe, moreso than generic shooter fans. I love the bolter.
I had the same feeling when Chaos showed up - all I get for killing this Chaos demon is a teleport animation? And the plasma bloopers are even worse. They just blink out. But overall, I'm really happy with the game. Not that I didn't smell a rat with Drogan as soon as I saw him. I haven't figured out Titus yet, though.

Recommend for sure to any 40K fan.

Amazing post, the audience will be engaged at best with your blog, we are leading as AWS live class software development company willing to contribute to the educational sector with high end secured software for live classes.