And with five more games, so ends my 2010 retrospective. You can check out the games I have already talked about in part one here, part two here, and part three here. 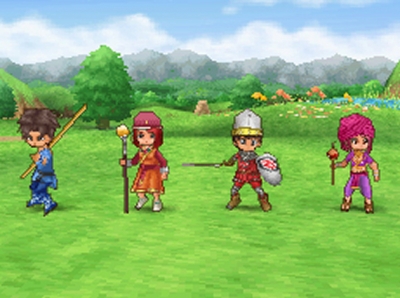 This was my first ever Dragon Quest title, and I had high hopes. I've heard much about the series generally and even more about this game specifically. Certainly, it is the first JRPG I have really enjoyed since Final Fantasy IX, and is also exactly the kind of title I have wanted for my DS for years--namely, a game that is as enjoyable to play for five minutes as it is for fifty.

While the Final Fantasy series seems intent on distancing itself from its roots as much as possible (I have no interest in Final Fantasy XIII whatsoever), Dragon Quest IX is a delightful re-imagining of SNES-era JRPGs with modern sensibilities. The dialogue is alarmingly well-written and full of self-aware humour and bad (i.e. awesome) puns. It takes itself serious enough and constantly throws interesting dilemmas at the player while also constantly lampooning JRPG tropes and cliches.

The story is passable but forgettable, and exists only to prop up the question, yet it does so aptly. Battles are quick and enjoyable and, thankfully, allows you to quickly change between AI settings or switch to full manual control. I hate turn-based games that don't let me control all my people. Dragon Quest IX's AI settings are usually okay, but it is good to be able to switch them off mid boss battle when need be.

Character customisation adds a lot, too. Being able to see every single piece of armour and weaponry on each of your characters adds just enough motivation to buy that new bandanna. I surprised myself by actually considering less-strong shoes for one character just because they matched the rest of her outfit.

I've only just recently tried out the much talked about multiplayer. It is enjoyable enough, though being in another player's world just feels... fruitless. However, pretending you are an AI companion for that player is kind of fun.

I only recall reading one Dragon Quest IX related article this year, and that was a spotlighted blog at Destructoid about how the game deals with the theme of faith.


Contender for best game manual of the year. In the same year that Ubisoft said it would stop supplying printed manuals with games (it was Ubisoft, right?), WarioWare D.I.Y came with a beautiful, thick little book with fold out covers that I sat down to read cover to cover in the vain hope that if I actually read it, game designers would create more manuals like this.

I am not much of a creator of content in games. In LittleBigPlanet, ModNation Racers, Minecraft, I spend very little time actually creating and much more time marveling at the things others create. Yet, in WarioWare D.I.Y, I found it incredibly simple to create fun mini-games of startling variety that just fit into the games existing style without much polish. It takes effort to make a working LittleBigPlanet level to look 'good', but not so in WarioWare D.I.Y.

Similar to the stunning manuals, if you are patient enough to sit through them, the tutorials are practically beginners lessons at object-orientated programming. Even a kid could sit through these and at the end understand the difference between a FOR... DO loop and a WHILE... DO loop. If you have a kid you think would enjoy programming, this is a pretty decent place to start.

Yet I feel it went under the radar a bit. Perhaps if it allowed more complex controls than just tapping, and if it came with more prepackaged games it would have fared better.  That said, it has the easiest to use online service of any DS game I've played... but that isn't saying much. If only the DS had a better integrated friend system to help spread games more, I would probably have spent many more hours on this game. At present, it is on the top of my "must return to soon" pile.

I first grabbed this game on my iphone, but didn't fully appreciate it until I grabbed it for my macbook in the recent Steam sale. BIT.TRIP BEAT (I am under the impression that the capitals are required) is a torturous, indie reinterpretation of ball-and-board games such as Breakout and Pong. It is an entertaining experience, but it is hard to call the game 'fun'. BIT.TRIP BEAT hurts. It makes you dizzy, it makes you motion-sick, it makes your eyes feel like they are bleeding. The visuals are psychedelic and go out of their way to make things difficult for you. Your targets are logic-defying and mindboggling, and the difficulty curve is steeper than the walls of your house.

Yet, I keep returning to it. This game is certainly not for everyone. Hell, this game might not be for anyone. But despite the fact I can't defeat the second level, I still want to keep playing it. Though, I no longer try the iphone version. I almost vomited on the bus one too many times. 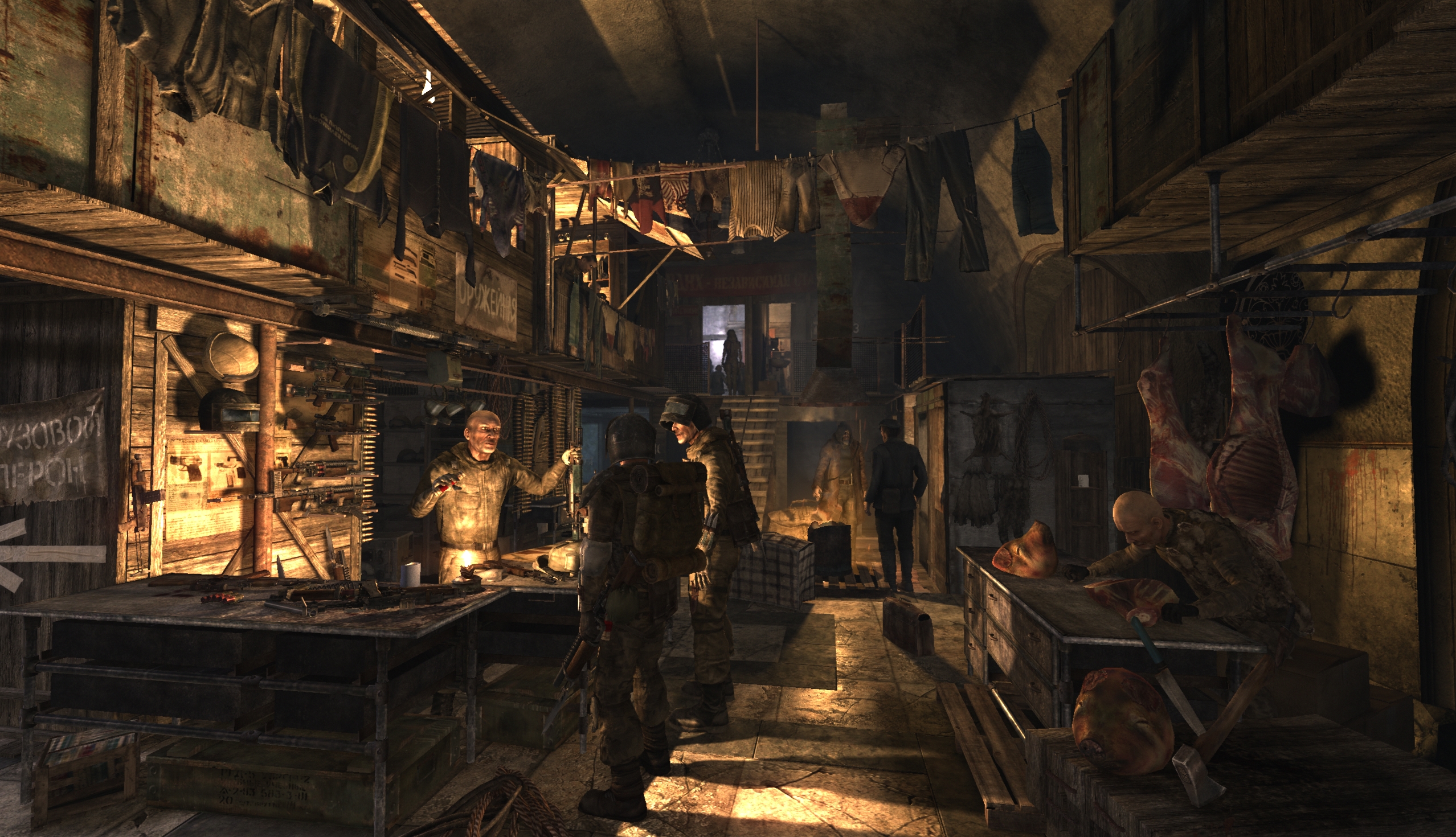 The gunplay in Metro 2033 is nothing special. The mutant enemies are arbitrary and forgettable at best and rage-inducing at worst. Towards the end these green blob... things made me rage quite more than once and nearly prevented me from finishing the game.

But the sense of atmosphere the game invokes is unprecedented. Walking around the train stations of Moscow's post-apocalyptic Metro, the world and its people felt real. Their day-to-day problems felt real, and I felt like a part of them. A lot of the worldbuilding is probably owing to the novel, but it pays off excellently. When the gameplay falls through, the fiction keeps you going.

The atmosphere is not just in the towns, however. The sense of cold and the sense of that bare, stubborn struggle of survival are so visceral. From saving individual bullets to wheezing through a spoiled oxygen mask filter instead of wasting a new one, it just felt so... real.

Playing a game in Russian certainly added something, also. It just felt right. I think it is a silly and demeaning analogy to say it felt like playing gaming's version of watching a world movie, but that is what it made me want. Metro 2033 made me hungry for more international games than the typical English and Japanese ones I have access to in this country.

I can't recall reading much about Metro 2033, but I'm sure things were written. Please leave me links to any pieces you remember reading.

My initial list for these posts had about twenty more games in it, but instead I thought I could put them all under this heading. I stress, though, that that is not because all these games together are only as important to me as one other 'real' game. It is simply because I cannot afford the time to write about twenty more games.

I have purchased (or downloaded for free) fifty-two iPhone games since purchasing my iPhone in February 2010. In that time I have played many games that I have thoroughly enjoyed and still often return to at the bus stop, on my lunch break, or just lying in bed. I hold these games largely responsible for the little playtime my DS has received.

Top games include Angry Birds, or course, but also Adam Saltsman's Canabalt and Gravity Hook work perfectly with the touch controls. Solipskier is another great title, requiring you to just keep your finger on the screen. Osmos works beautifully with the touch controls (far better than its PC counterpart), and Spider uses the iPhone's unique abilities superbly to create a very interesting and fresh platformer that also tells a spatial narrative. Meanwhile Tractor Beam is an interesting take on Asteroid which uses physics in some very interesting ways.

All these games are great games because they would not (or do not) work on other platforms. Too many big publishers try to release ports of big console releases on iPhone for $10 that play horribly, yet the indies and the smaller companies have understood that there still exists so much potential in simplistic, minimalist controls, and these are the games that have made the iPhone such a great gaming platform.

That said my most-played and most enjoyed iPhone game was, surprisingly, one using on-screen controls. Pix'n Love Rush is a great little platformer that I have trouble explaining why I enjoy. Each level is mere seconds long, and you complete a five minute game by perfecting as many of these levels as possible, racking up your multiplier as you go. The visuals are delightfully retro (of course) and there are many nods to previous generations of games, as well as a great chiptune soundtrack. Perhaps it is the retro indie platformer obsessive in me, perhaps it is my love of score-chasing, but Pix'n Love Rush just struck a nerve in me and I found it very hard to stop playing. I even wrote a little reader review for Kotaku about it!


And those are the games I played in 2010. How about you? Any particularly interesting ones that tickled your brain that I didn't cover? Any articles I should have linked to but didn't? Let me know! And thanks for actually reading all these. It's been a pleasure to relive all these games, and now I am tempted to start new games on all of them!

Posted by Brendan Keogh at 5:06 AM

Thanks for the list I enjoyed reading these posts. Though I have to admit I was filled with envy at the fact that you had time to devote to so many games this year.

Figured the least I could do in return was fill your request for some Metro 2033 articles.

Here's a choice quote from Tom Bissell in particular seemed to really enjoy it.

"What I love about Metro 2033 is that it takes the power fantasy tropes of the first-person shooter and effectively Russianizes them. In Western shooters, typically, you progress through the game, unlocking deadlier and more accurate weapons and cooler and ever-more-neato technology. Metro 2033 says, To hell with all that. Your sniper rifle is pneumatic. You actually have to pump the thing up manually before firing it. Your bullets suck. Really good bullets are the gameworld's only currency; they're literally what you use to buy stuff. This means that, when you switch to the good bullets to fight, you're losing money. Ammunition's expensive in real life, of course, and this was the first shooter I've seen that tries to explore that fact. "

RPS wrote the article that not only made me aware of the game's existence but somehow brainwashed me into instantly purchasing it. The article is not in depth but it's a fun read nontheless: http://www.rockpapershotgun.com/2010/12/14/the-games-of-christmas-%E2%80%9910-day-14/

Thanks Alex and Lazaro, glad you enjoyed them.

And thanks for the links, Lazaro! I have them all bookmarked and will give them a read soon. Thanks!