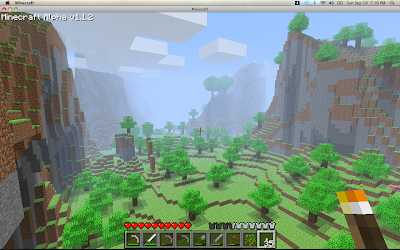 Hello there.
Due to my study load and some other writing commitments, Critical Damage has been a bit quiet lately. I have a few deadlines coming up in the next week and after that I will finish off a few posts I have been working on and try to get them up. However, in the meantime, on something of a whim I seem to have started a side project that is turning out to be quite interesting.
That project is Towards Dawn, and is simply a diary I am keeping of one specific Minecraft game where instead of setting up a 'home', I continuously walk east towards the dawn and note the new and exotic things I see.
In the earliest forming of the idea in my mind, all I was thinking was that playing Minecraft as a nomad could possibly be kind of a cool, alternative way of playing. The majority of players tend to have a 'home', not too far from where they initially spawn on the map. Sometimes this is a large castle; sometimes it is just the first room in the player's first cave. Typically this home contains vast riches that the player has mined and placed in chests for safekeeping. I thought it could be interesting to subvert this. In my Towards Dawn game, I only possess what I can carry with me. I have no home (though my spawn point far to the west still feels like home, interestingly). I leave as little a mark on the lands I pass through as possible.
I did not fully consider at first how this would in fact be something of a perma-death experiment, somewhat similar to Ben Abraham's Far Cry 2 experiment, or the many others that have already followed. I made no pact with myself to delete the game if I die, but if (when) I do, my nomad adventure will certainly be over. I will spawn back at 'home' and I  most certainly will not be tracing my steps for game-days on end to pick up the trail.
Perma-death playthroughs are something I have been fascinated about for some time as they relate deeply with my interest in consequece (that the blog where Ben's initial perma-death experiment can be found is titled Sometimes Life Requires Consequence says it all).
The extreme consequences faced in a perma-death playthrough of a game highlight, I think, how permanence adds to the significance of a story. The story is not weakened by the player dying and then rewinding time to tell the story a slightly different way--the player dies and the story ends and is complete authoritative. This isn't how the story 'could' be; this is the story.
This is not to say that for the sake of story all games should go so far as to delete the player's file when they die. Rather, that permanency in some fashion can go a long way towards strengthening the fiction of a game.
Minecraft already had this before I began my adventure, and I would argue that it is one of the reasons the game resonates so deeply to so many people. While death is not the end in Minecraft, its consequences are certainly real. Minutes after my first ever diamond discovery, I tripped and fell in lava, losing said diamond, along with over two hours worth of other resources. I respawned and the game continued, but that loot was lost forever. The feeling of loss and despair in my gut as I watched myself burn to death that night was one of the strongest emotional reactions I have ever felt towards a game. That is not an exaggeration.
This occurs simply because of how Minecraft saves the game. That is, the game is always being saved right now. You cannot simply load an old save and not get your items back. The second you died, your game saved again.
This permanency, this fact that you can not go back, that you must keep moving forward, makes experiences in Minecraft more meaningful. At least I feel like they do for me. That existing energy is something that Towards Dawn is tapping into.
But that was quite a tangent! The point is that Towards Dawn is an accidental perma-death experiment, and I feel that is what makes it more interesting than if I were to simply blog as I begin to build a castle, die a couple of times, and finish building a castle.
But what is the point? What is Towards Dawn trying to prove? Well, I'm not too sure yet. I'm thinking that will become apparent as I continue to play. For now I am enjoying the new experiences my less grounded, less materialistic lifestyle is offering. When it ends (whenever that is), perhaps I will have something more profound to say about it. For the meantime, I hope you enjoy the journey.
You can follow Towards Dawn here, or start from the first post here. Also, I would really appreciate some feedback. Is it interesting? Boring? Is there anything you think should be changed in either the presentation or the playing? Let me know!
In other news, I am playing Halo: Reach. But this post has already gone on too long so that will have to wait for a future post.
Posted by Brendan Keogh at 3:12 AM

I love the article!!! wish i had more to say but keep up the good work.