Guest Moments: Diary of a Minecrafter

[In this pseudo-regular section, I record some of my more memorable gaming moments, the moments that remind me why I play games. Those who follow me on Twitter will already be aware of my recent obsession with Minecraft's emergent gameplay. The simplest of systems (mine resources to craft tools to mine better resources to craft better tools) is applied to a sprawling, procedural world for you to explore, tame, and master. New stories are born practically by the minute. The following is one such story. However, it is not my own.
The first time I read the following story I was laying in a bed in a Melbourne youth hostel. It was 7am on a Sunday morning and my phone beeped with a new email. For some reason I rolled over and checked it, only to find this rambling, livid, excited tale from my brother, Glynn Keogh, who had just lost an entire night to his Minecraft world. It was a good tale that exemplified exactly what I love about this game, so I asked him if he would let me re-post it here. So thanks, Glynn, for the following tale.]
Note: Screen captures are taken from my own game, not Glynn's adventure. 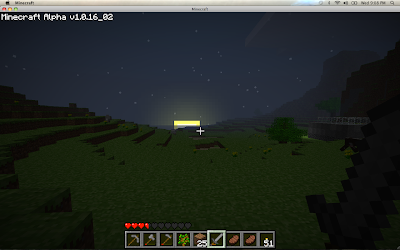 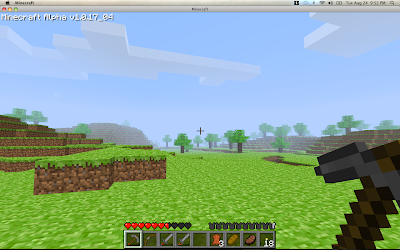 After finally finding my way home from that fantastic and terrifying hole in the ground (another adventure in itself), I am once more at the advancing end of the subterranean highway. Now with new tools in hand and a good number of fresh torches in my pack, I am ready to continue my work. The sound of running water is no longer audible through the tunnel walls, and I can only assume that my efforts to redirect the stream were successful in leading it away from this point. In any case, I am not about to go looking for it again. Happy to finally be back to mining, I swing my pick at the wall and another chunk of rock shatters. But before I can swing again, the gap I have opened up is filled with loose gravel. I scoop it clear, and yet more replaces it. Careful to avoid a fatal cave-in, I continue scooping away the debris until the flow stops suddenly. With a loud clatter, something heavy lands at my feet.
A makeshift workbench which, until moments ago, had been resting on a pile of gravel between a river of water and a pool of lava in a cavern, which is beautiful in a deadly sort of way, not 3 squares above the fore of my subterranean highway.
Posted by Brendan Keogh at 6:44 PM

Allassignmenthelp is your academic caretaker that has been the most sought out service in the US and other country and we have an answer to all your assignment queries. Write My Assignment For Me

This game is getting to be mainstream step by step. Along these lines, Mojang chose to make an android form, so the Minecraft darlings play this game whenever and anyplace. Apk form has many entrancing highlights. There is no compelling reason to gather and open anything. You can begin the APK variant with best highlights in that spot. How about we look at some best highlights giving by Minecraft. minecraft