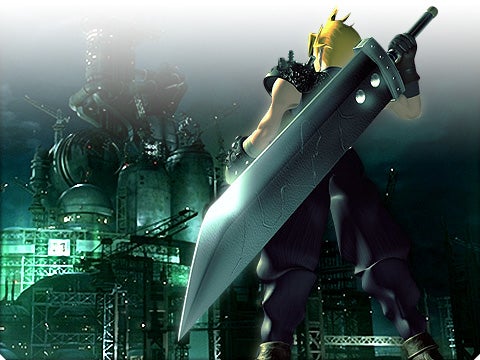 “Christ, how do I jump!?”
This is the first thought that enters my head as Final Fantasy VII’s opening cut-scene melds seamlessly into the game’s opening level. I mash buttons frantically as the two blue-clad troops attack me on the platform at the Sector One Reactor station, shooting machine guns and throwing uppercuts. Eventually, more by chance than any basic cognitive skill, I manage to press ‘O’ and choose ‘Attack’. EX-SOLDIER runs across the screen, swings his oversized sword, then runs back across to the opposite side. I have no idea if I hit the trooper or not, but some strange white numbers appear before quickly fading. No idea what those are about.
And so, with chaos and confusion, begins what would eventually evolve into a several-year obsession. This game is unlike anything I have experienced before. Enemies appear out of nowhere; I can’t jump; my character just stands there and waits for the enemies to attack him. The menus are a monumental hurdle: while Western Playstation games use ‘X’ as the universal ‘OK’ button and ‘∆’ as ‘CANCEL’, Final Fantasy VII, being Japanese, uses ‘O’ as ‘OK’ and, worst of all, ‘X’ as ‘CANCEL’. Even the physical aspects of the game are wrong. The case is HUGE. Three discs? What on Earth could the other two be for?
It is 1998 and I am twelve-years-old when I first rent it from the local Video Ezy. I choose it over the shelves of generic platform games and shooting games because I have seen a cool TV advertisement showing off all its beautiful cut-scenes. But why do I go back every week and rent it again and again for months until I finally have enough pocket money saved to buy my own copy? At this early stage, I do not think it is a labour of love (that would come later), but just pure bewilderment. I am not so naïve to think Final Fantasy VII was revolutionary in the greater scheme of things, but it was certainly revolutionary for me. I had to re-learn how to play videogames from the ground up. I spent several minutes figuring out how to use the save point (not to mention my new memory card). I died four times on the first boss because of the poorly worded “Attack while its tail is up! It counters with its laser!” (I read this as I should attack while the tail was up). Every hour I played, the game doubled in scope. I stuck with it and sunk more of my time into it than any game previously, but it just kept going… And then we left Midgar.
I cannot say where, exactly, but at some point it just clicked: Final Fantasy VII was not showing me a literal depiction of the game-world, but a representation. My party and the enemies were not really running back and forth, taking turns to hit each other—this was just a representation of the battle that was truly happening. The speed with which my ATB gauge filled represented how fast my characters were. I was not missing targets that were standing still; rather, my accuracy was being compared to the enemy’s evasion to determine my probability of hitting. It would be another twelve years before I had the words, but the game’s rules determine the game’s representative fiction.
Outside battles, too, the game–world represents an actual world that was only ever hinted at. On a meta level, the constant switches in graphic styles—from gameplay, to cut-scene, to full motion video of varying degrees of quality—portray completely different worlds. In more specific circumstances, a character will walk two steps to one side to allow other characters to have a private conversation. Never mind the enemies appearing out of nowhere and the party characters walking into nowhere.

As a representative system, Final Fantasy VII demanded that I did not just use my controller to engage with the game, but also my mind. If I accepted the world as portrayed by Final Fantasy VII at face value, the game would have made no sense. The world-as-shown works to rules incomprehensibly different to our own world. However, by using my mind to interact with the game, I was able to imagine a ‘real’ game-world lying beneath and dependent on the layers of representation.
Of course, unknown to me at the time, this is something gamers had already been doing for decades on desktop text adventures and tabletop role-plays. But for me, growing up on platform games on the Master System II and Super Nintendo, I had never before been asked to invest more into a game than what I could see on the screen.
Final Fantasy VII was the first videogame story that I actively engaged with because I had to actively engage with it. It was up to my imagination to draw out the story and the world from the rules and mechanics. Once I learnt to do this, Final Fantasy VII stopped being this weird, quirky ungame and became a fully fledged fictional obsession. The world and the characters began to matter to me not because I made important decisions that affected them, but because I was central in crafting them. Not with a character generator like Morrowind or Dragon Age, but with my imagination. Their voices, their movements, their fighting styles—things that the game only ever hints at, I am responsible for forming.
Largely, the reason Final Fantasy VII looks like it does and requires the player’s imagination to fill in so many blanks is due to the technical limitations of the time as well as hangovers from the series’ Super Nintendo iterations. As the years go by and technology allows better visuals, videogames focus more on crafting more ‘realistic’ (or, rather, comprehensible) depictions of their worlds rather than representative ones. In just the Final Fantasy series alone, we see in later games the introduction on voice acting, of enemies walking around outside battles, of more consistent graphic styles and properly-proportioned character models.
While better technology is allowing more interactive narratives in the way the game-world is able to react to the player’s actions, I feel it is also detracting from them by leaving less room for imagined interactions. That is, we can interact more with games and their worlds with our hands, but less and less with our minds. We are able to perform more and more actions; however, these actions are largely meaningless since no room is left for personal interpretation.
The more the game tries to convince us that this is how the world is, the less likely we will be convinced. On the other hand, however, the more the game leaves ambiguous, the more our minds will instinctively fill in the blanks. Take platform games such as Braid and Limbo, for instance. Although arguably more ‘artistically-minded’ (whatever that may mean) than Final Fantasy VII, these games share the same attributes that allow me to invest in the told story. All these games can only be completed in one specific way; none have room for improvisation. Yet, because of their abstract, non-specific styles, there is plenty of space for the player to imbed their own meaning into their actions and the greater narrative.
Over at Above 49, Nels Anderson has been talking about the uncanny valley games enter when they try too hard to depict realism. This, specifically, stood out to me:
"Some might say this is splitting hairs, but what matters is as soon as you start to notice these [slight flaws in games trying to be realistic], it's not possible to stop noticing them. The incongruities can pull the player out of the experience, reminding them they're not seeing a real place, not dealing with real people or real consequences.”
In Final Fantasy VII the characters do not have mouths. This does not matter as you are able to imagine them with mouths. If the characters of a game such as Heavy Rain, for instance, walked around without mouths, that would just be creepy and weird. This is because Heavy Rain (along with most AAA titles of recent times) is telling the player what the world and the characters are like, not asking them to imagine what they may be like.
Anderson uses the example of Puzzle Agent to show a game can evoke how a place feels far more convincingly than a game can ever show how a place looks. For my twelve-year-old self, this is exactly what Final Fantasy VII did. I knew how the Midgar slums, Nibelheim, and the Golden Saucer felt and used my imagination to fill in the blanks that the game did not show me. I became more invested in the world because, in large, that world only existed in my head.
We talk a lot about giving the player agency over the narrative, thinking that the only way to do this is to increase the intricacy of choices and the quantity of paths. These are certainly methods that we should keep exploring, but how about the way readers have been interacting with narratives for centuries: with their imaginations?
Posted by Brendan Keogh at 11:58 PM

I think the especially tricky bit is convincing audiences something is a representation rather than a depiction. It's doubly hard with games since we've been pushing the "more real than ever before" for a long time now.

Going the depiction route can work (e.g. Red Dead Redemption) but in a lot of ways, it's riskier than something more abstract. How to convince people that's worth considering rather than just regarding something as "having bad graphics" is the tricky part.

Hi Nels, thanks for dropping by!

I think that is indeed the difficulty that all media face, convincing the audience what they see is just a representation. I used to always watch films going "What? That is so unrealistic!" Until I finally realised (partially thanks to some Film Studies, I admit) that these "unrealistic" bits were just cinematic conventions being used to potray certain elements.

But certainly, convincing the broader audience of these is a far greater problem, and I have no solution for that one, I am afraid!

Thanks again for stopping by :)

I tried to write about imagination over slick graphics just the other day. I didn't get ver far, but you just summed up what I wasn't able to. A great read.

I really relate to this post. For me, it was Final Fantasy 2 and 3 for SNES, and then 7 a few years later. I remember renting FFIII much like you described, until I managed to get my parents to spend the $70 to buy the game. I played through it at least a dozen times, spending 50+ hours on each playthrough. I did much the same with FFVII.

I have been studying programming and game creation for the last year or so because I want to make games like them, games that are abstract in all the right ways, and games that have a bold, artistic story that also leaves much to your imagination.

Keep up the good writing!