[Game Diary is a semi-regular column reflecting on the games I am currently playing, articles I have recently read, and writings I am currently working on.]
It has been quite some time since my last Game Diary entry. I can put this down to one major excuse: Red Dead Redemption. Though, ModNation Racers as well as cheap copies of Mass Effect 2 and Final Fantasy XIII have not helped matters either. I now find myself in the unenviable position of having three hundred-plus hour games to complete along with plenty of articles and essays to write, and great articles to read.
Games I Played
Red Dead Redemption. Where to begin? What to say about this game that you have not already heard? While I know many of you will disagree with me, I feel Rockstar are doing some of the most exciting work out there in terms of incorporating mature, intelligent stories into videogames. I know Red Dead Redemption is created by a different team than Grand Theft Auto IV, but Dan Houser is still a major writer (if the opening credits are to be believed), and it certainly shows. The entire game drips with intelligent satire and knowing nods to the Western genre--staying true to the aesthetics and iconography while also critiqueing it with a contemporary eye. Rockstar's biting satire remains but the potty humour and mention of titties has (thankfully) largely been left in Liberty City.
The map is sprawling and vast, yet full of things to do. I rarely feel the urge to quick travel; this is the kind of world that begs you to take your time exploring. Shooting is more fun than in Grand Theft Auto IV, and actually quite challenging once you turn off auto-aim. My only major criticism is that every mission is basically the same predictable structure (ride somewhere, shoot stuff, ride back), but there are a few delightful surprises. But even when the missions are all the same, the scriptwriting and presented fiction are all so tight that I hardly mind galloping into Armadillo one more time. 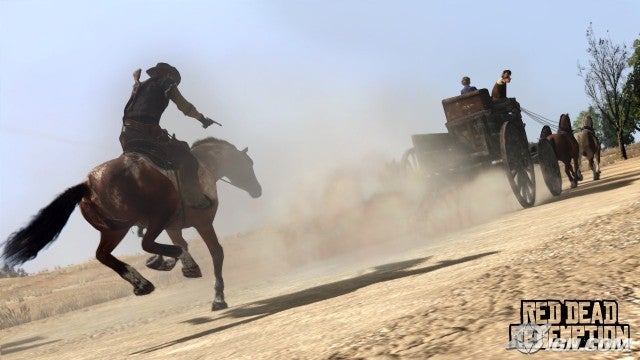 ModNation Racers. I won't repeat everything I have already said in my post on this game, suffice to say that it is an excellent, enjoyable racer hidden behind a horrible mish-mash of laggy, un-navigable menus.
Mass Effect 2. I made the mistake of walking past EB Games the other week just as their stocktake sale was commencing. Before I knew it, I had picked up half-price copies of Mass Effect 2 and Final Fantasy XIII--both games I intended to play "one day" when they didn't cost $100. I guess it is that day!
I have something of an allergic reaction to BioWare games, I admit. I don't know what it is. Every since Knights of the Old Republic, I have started a game with high hopes after hearing nothing but positive things, and then I just get... over it, I suppose, quite quickly. Perhaps not 'bored' so much as 'intimidated'. Perhaps BioWare's stories, which I really do have some control, scare the crap out of me and, afraid of the responsibility, I run back to my more predictable, linear games. Well whatever it is, I am glad to say that Mass Effect 1 was the exception to my BioWare fallacy, and Mass Effect 2 seems likely to continue the tradition. i am glad that they have stripped back (or hidden away) the role-playing elements; though, it would have been nice if they had fine tuned the combat a bit more to make up for the lack of number-crunching depth. But it is early days yet, perhaps when I stop relying on my pistol and single tech skill it will get a bit more involving. That said, the graphics are still slick, the voice acting is still incredible, and the world(s) are still beautiful. I'm looking forward to putting a heap of hours into this one when I get the chance. 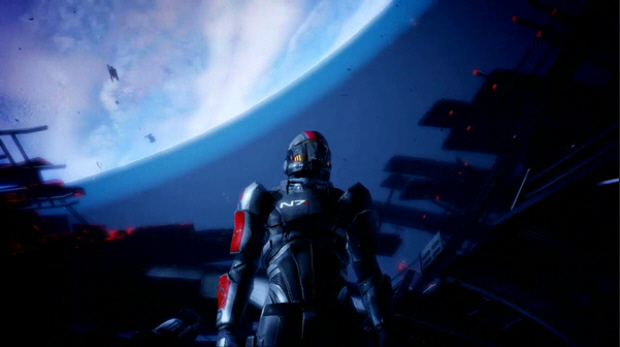 Final Fantasy XIII. Okay. I admit I have not actually played this yet, but my girlfriend has, and I have been sitting nearby for the five-ish hours she has played so far. So far it seems to be exactly as every review and article I read about it says: one incredibly slow grind that drips abilities and options to the player at the slowest pace imaginable, as though the game is afraid the player could not possibly handle two 'new' concepts at once (as if anything in Final Fantasy is new anymore). Though now, after five hours, the combat is looking a lot more compelling and I am more tempted to start up a game myself.
The scriptwriting and voice acting, while still not amazing, seems a great deal better than any previous Final Fantasy. I particularly like all the tensions and strains between the various characters. And all the nods to Final Fantasy VII are enjoyable and appreciated.

Some Things That I Read.
"I'm Your Huckleberry" at The Brainy Gamer. An entertaining and well-written little piece telling the tale of one player's perpetual fight with an anti-Semite shopkeeper in Red Dead Redemption.
"Groping The Map: Pauper's Drop" at Groping The Elephant. Justin Keverne has set himself a huge challenge of writing these massive, multi-part articles that thoroughly walk through specific game levels and explore how those levels use space and their mise-en-scene to guide the player. His first installment, on the Bioshock 2 level Pauper's Drop is nearly all up (five out of seven sections!) and certainly worth the read. Justin has a great critical eye for the ways the level manipulates and directs the player, and how the player understands the world through the level. As someone who has a great interest in videogame level design but absolutely no formal education in the matter, I'm finding these posts as educational as they are interesting.
"Video Games, I've Let You Down" at Kotaku. Leigh Alexander's piece about the difficulty of trying to explain why videogames can be great to non-gamers strikes pretty close to home. A good read.
Practically all of EDGE E215. Alas, my subscription to EDGE ran out at E214, and then E215 has a whole bunch of great articles. So I went and bought myself a copy from a shop, once they finally got it imported, and then went home and renewed my subscription. The retrospective on Halo is especially interesting, as it is a far greater version of a piece I have wanted to write for some time. Halo is a spectacular game, fanboy-love aside, and I think this piece does a good job at justifying why. The Time Extend on Sim City 4 made me pick up a cheap copy (I haven't played a Sim game since SimCity on SNES), and the LittleBigPlanet2 hype article was, well, successful. Oh, not to mention the extensive interview with Shigeru Miyamoto.
Some Things That I Wrote.
Most exciting for me since I last posted a Game Diary: Kotaku Australia published my reader review of Metro 2033. Apart from that, I have written a rambling review of why I hate to love ModNation Racers, an article to pay tribute to the heroes of the Moscow Metro that risked their lives for me, as well as a reluctant, hesitant piece defending the cut-scene as a valid mechanic of interactive storytelling. The same old university writing is continuing at the same old pace.
And that is about it.
Posted by Brendan Keogh at 1:52 AM

And I fully agree with your comments on FFXIII. Look, I'm not a hardcore gamer, I don't have the growing-up-playing-games knowledge of controls and tactics and abilities. However if they give me new controls anymore slowly I might be in a nursing home before I get the ability to actually cast fira.

As much as I know FFX was roundly criticised by those who love the series, it was my first 'proper' introduction to the games, and I really like the sphere grid (yes, once I figured out what it all meant) and the semi-freedom to develop your characters.

So far FFXIII is driving me MAD with my inability to level up even though i have the points, because I have to wait till I trigger yet another tutorial.

The graphics are beautiful though, and I do however have a massive virtual crush on Lightning. ... just saying


Thanks for sharing this great post. It is very enlightening. I absolutely love to read informative stuff. Looking forward to find out more and acquire further knowledge from here! Cheers